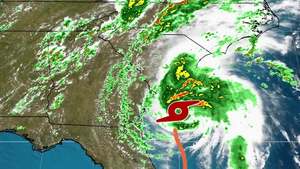 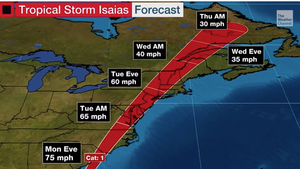 Tropical Storm Isaias (ees-ah-EE-ahs) is expected to regain hurricane strength before it pushes ashore into the Carolinas later Monday with damaging winds, flooding rainfall and storm surge flooding. The storm will then spread those impacts up the East Coast as far north as New England through Tuesday night.

However, the (NOAA)  believes the magnitude of local hazards and impacts will increase and Putnam County is now included in the affected areas. The main threats with this system involve heavy rainfall, strong winds, minor to moderate coastal flooding, along with high surf and dangerous rip currents. Locally heavy rain is expected with a widespread 2 to 4 inches, with localized amounts up to 6 inches possible.

The heaviest rain is most likely to occur across New York City, Northeast New Jersey and the Lower Hudson Valley early Tuesday morning through Tuesday evening, and eastern sections Tuesday afternoon into Tuesday night. The strongest winds are likely to occur across Long Island, southern Westchester and southern Connecticut, and the New York City and New Jersey Metro areas.

Dangerous marine conditions are likely across all of the coastal waters Tuesday and Tuesday night. High surf and dangerous rip currents are expected along the ocean beaches Monday through Wednesday. The effects from Tropical Storm Isaias are expected to diminish quickly from southwest to northeast across the area Tuesday night.