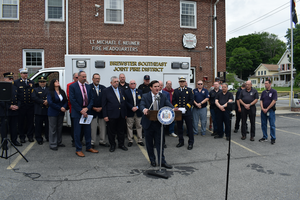 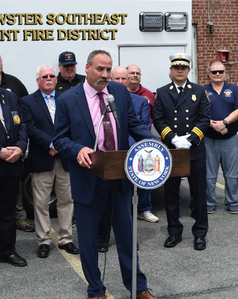 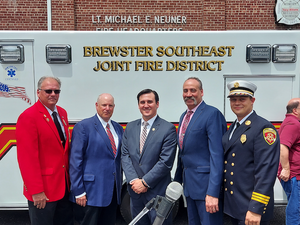 Assemblyman Kevin Byrne (R,C,I,SAM,ROS-Mahopac) held a press conference on Friday afternoon at the Brewster Volunteer Fire Department with over thirty members of the volunteer emergency services community from throughout the state to express support and call for a vote on Assembly Bill A.534, which would permit volunteer fire departments that provide ambulance services to recover costs from insurance companies as volunteer ambulance services do presently.

The legislation passed the Senate earlier this year in March (S.1286) for the second time.  On May 25, 2021 the Assembly Committee on Local Governments reported it out of committee unanimously for the first time ever.  It now resides in the Assembly Ways and Means Committee, of which Assemblyman Byrne is a member, and awaits further action.

Presently, volunteer fire departments in New York State that provide ambulance services, unlike volunteer ambulance corps, are prohibited from charging a fee for such service. Unable to charge insurance or provide what is commonly referred to as “soft billing”, fire districts and fire protection districts are often forced to rely more on property taxes to pay for needed equipment, training and services. The potential revenue from this legislation could help supplement existing revenue to purchase new needed equipment and resources and/or provide additional tax relief to local property taxpayers.

“I want to say on behalf of the men and women who have selflessly done this job because they care about their community, they need resources and support, and this bill will do that. Next week is the last week of legislative session, so we need keep the pressure on and get Albany to pass this bill to support our first responders,” said Assemblyman Byrne. Byrne continued “There’s been a disparity in how fire departments can collect revenue and the system as its currently designed actually encourages some departments to split and create a whole second ambulance corps just so they can bill for those services and collect revenue for essential equipment and training from the insurance companies instead of relying so heavily on property taxes.”

“We are missing about 100 million dollars in opportunity statewide for fire departments that can’t recover costs,” said Fireman Association of State of New York Legislative Chairman Michael Karashay. “Our fire departments are not looking to make a profit on this. They want to be on a level playing field. We are the only state in the union that doesn’t allow volunteer fire departments to bill for ambulance services and the law that prohibits this is antiquated and needs to change.”

A 2017 study in New York reveals that 297,000 ambulance calls were handled by fire departments that operated ambulances, and it has been estimated that the legislation would generate an additional $100 million in revenue for fire departments providing these services. The 94th Assembly District includes numerous volunteer fire and ambulance agencies, of which the Somers FD, Brewster FD, Mahopac FD, and Mahopac Falls FD also provide ambulance services and would directly benefit from this legislation.

The Senate version of the bill (S1286) passed the Senate in March of this year. A.534 passed the Assembly Local Governments unanimously on May 25th and has now been reported to the Way and Means Committee. The timeline to get this proposal passed this year is rapidly shrinking as the last day scheduled of Legislative Session in Albany is June 10th.