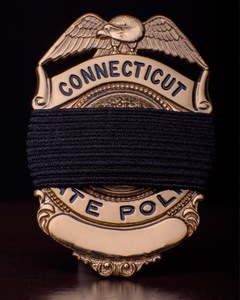 A Connecticut State Police Sergeant has passed away due to injuries suffered earlier today when his police cruiser was swept away by flood waters in Woodbury.

State police officials confirmed his death at a 3:30 pm news conference. They said he was working a midnight shift and at about 3:30 this morning he radioed Troop L headquarters that his cruiser was caught in the flood. The troopers at Troop L HQ immediately realized he was in distress and were able to ping his cell phone and sent all available assets to the area to try to assist him.

Helicopters searching the area found the State Police cruiser partially submerged in the floodwaters but the vehicle was empty. After more than an hour of searching the Trooper was located in the water. They immediately began life saving efforts and he was air lifted by Life Star to Yale-New Haven Hospital and it was confirmed that the 26 year police veteran had passed away upon arrival at the hospital.

The State Police have not yet released the Trooper’s name but Officer Muniz of the Connecticut State Police confirmed that the trooper was a Sergeant assigned to Troop L in Litchfield.

Officials did say more then 9 fire departments responded to the scene to assist CPD in the search and rescue and included 3 helicopters and several dive teams. The U.S. Coast Guard also sent personnel to assist in the search.