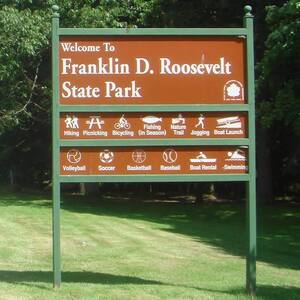 “Our local healthcare system and regional hospitals are under extreme stress as testing demand remains at an all-time high,” four bipartisan Town Board members wrote in their letter. “Patients are traveling from as far as Long Island in a desperate attempt to get a test at our local urgent care centers. The strain has caused our local police department to assist with crowd control at times.”

State officials have declared the state park an emergency staging ground in the past. After Tropical Storm Isaias, Con Edison used the park as a crew-dispatch site for power-line repairs.

A copy of the letter sent to Governor Hochul can be read by clicking here.

New York State Senator Pete Harckham has also sent a letter to Governor Kathy Hochul calling on the State to open a mobile testing site in Franklin D. Roosevelt State Park to help fight the latest spike in Covid-19 cases that have ravaged the state and the Lower Hudson Valley.

"As we continue to fight this pandemic, we need to utilize all of the resources and tools available to us, and we know that testing is a crucial component in stopping the spread,” Harckham said. “I urge the Governor to promptly open a site in the Hudson Valley region and recommend utilizing FDR State Park as a testing site. It’s large enough to easily accommodate a drive-thru testing site, and it is easily accessible off the Taconic State Parkway and Route 202.”`