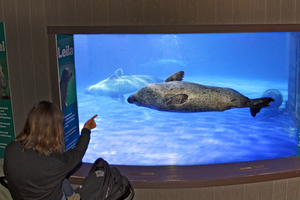 Norwalk residents can get close to seals, sharks, sea turtles and even “Shark-Diving Santa” for free on Sat., Dec. 7 in a special admission offer from their grateful hometown jewel, The Maritime Aquarium at Norwalk.

On The Maritime Aquarium’s annual “Salute Norwalk Day,” the popular family attraction thanks the residents of Norwalk for their support by offering free admission to city residents. Proof of residency is required.

Visiting The Maritime Aquarium offers the thrill of getting close to more than 3,000 marine animals, including sand tiger sharks, harbor seals, sea turtles and pulsing jellyfish – all native to Long Island Sound, its watershed and the oceans beyond.

Besides welcoming Norwalk residents for free on Dec. 7, the Aquarium also will be hosting “Shark-Diving Santa” at 12:15, 1:15 and 2:15 p.m. Santa Claus will squeeze into his scuba gear and join the Aquarium’s volunteer dive team in the “Ocean Beyond the Sound” exhibit to dispel myths about sharks, including the featured 7- to 9-foot sand tiger and lemon sharks. Santa will swim up to the exhibit window so bring your camera for a unique “photo with Santa.” (“Shark-Diving Santa” is offered most Thursdays, Saturdays and Sundays in December.)

Also special in December is the Aquarium’s “Flurry Zone,” a brief fun indoor snow squall that happens on the hour from 10 a.m. to 4 p.m. daily.

Plus, the citizenry can take pride in their hometown IMAX movie theater, whose six-story screen is the largest in Connecticut. On Dec. 7, choose between “Superpower Dogs” at 11 a.m. and 2 p.m.; “Dolphins” at noon & 3 p.m.; and “Journey to the South Pacific” at 1 & 4 p.m.

(The holiday IMAX movie “The Polar Express” plays at 5 p.m. and, as a feature-length film, is specially priced and not included as part of “Salute Norwalk Day.”)

“Salute Norwalk Day” is just one of many contributions The Maritime Aquarium makes to Norwalk and its citizens. The Aquarium offers dozens of educational programs and other marine-science opportunities that supplement the education of Norwalk's students, sometimes at no cost to the schools. And the Aquarium and its 500,000 visitors inject more than $20 million annually into Norwalk's economy.

For more information about Maritime Aquarium offerings in December, to reserve tickets or to purchase an Aquarium membership as a holiday gift, go online to www.maritimeaquarium.org.