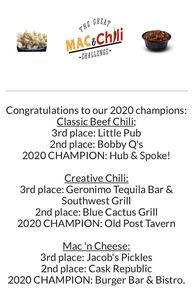 Sunday’s Great Mac n’ Chili Challenge drew the largest crowd to date at the new SoNo Collection in Norwalk. Thousands attended the 6th Annual event to enjoy unlimited samples of chili and mac ‘n cheese and determined who will be the new 2020 champions. Attendees used a new digital voting system via their cell phones instead of traditional paper ballots in an effort to be more environmentally friendly.

All three first place finishers received a unique trophy of a rocket ship. “The rocket ship will look great in their restaurants, catching customers eyes and letting them know that their chili or mac ‘n cheese was truly out of this world” Jim Keenan, event director said with a smile. The winners also received a banner to place outside their restaurants letting people know they are the 2020 people’s champions.

This was the first time this event was indoors and at The SoNo Collection. All who enjoyed the event also got to explore all the stores in the mall.   Passionate foodies offered their advice on how to improve the event in the future from anything from furniture to voting. Being a true people’s choice event, they loved talking to the chefs and restaurant owners about their food entries plus catering orders for the upcoming big football game.

The event was full of firsts as many of the crowd had yet to experience the new venue. The event also made beer available for the first time which was provided by New Belgium Brewing. Competing restaurants added both shredded cheese and sour cream from Cabot’s Creamery to their culinary creations! Samples of chocolate milk from Wade’s Dairy was the perfect cure-all for those who wanted to quell any spicy entree while flavored seltzers were available to sample from Polar Beverages. Sea salt tortilla chips by Mi Nina served as a tasty alternative to a spoon as many used them to eat their chili. City Carting provided single stream recycling effort helping the event with their goal to be zero waste.

Some other highlights included a smoked Bison chili from Harbor Harvest of Norwalk, a popular vegetarian chili made with a tzatziki sauce from 273 Kitchen from Harrison NY, a pizza mac creation from Planet Pizza in Norwalk, a pulled pork mac ‘n cheese from the Orignal Vazzy’s in Stratford and a stout braised brisket chili from Local Kitchen in Norwalk and Fairfield.

Funds to Food Rescue US will be donated in the ongoing fight against hunger. For complete results go to: www.MacAndChili.com