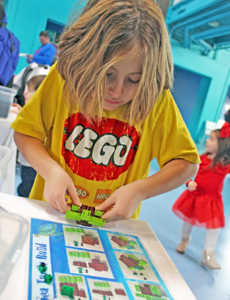 Piece together a shark, jellyfish, seal or other marine animal to add to an enormous ocean scene March 7 and 8 during “LEGO® Weekend” at The Maritime Aquarium at Norwalk.

During this popular fourth-annual event, LEGO experts from Play-Well TEKnologies will be onhand both days to oversee construction of a colorful coral reef made entirely out of LEGO blocks in Newman’s Own Hall.

The experts will create the underwater environment, but it needs animals! Aquarium guests can build LEGO marine creatures that will be part of the finished piece. Choose from such animals as a jellyfish, seal, shark, sting ray, turtle and fish, or use your imagination to build an animal unknown to science.

“We love ‘LEGO Weekend’ for how it adds a colorful and creative element to the Aquarium, but we also love how it challenges young guests to think through how things go together to build their creatures,” said Aquarium spokesman Dave Sigworth.

Also during “LEGO Weekend,” Aquarium guests can build motorized LEGO machines that will duel for superiority on LEGO Battletracks, as well as other LEGO projects.

The fun runs from 10 a.m. to 5 p.m. both days, but Maritime Aquarium members can get to the LEGO blocks first on Sat., March 7 beginning at 9 a.m. (with proof of membership).

Learn more about “LEGO Weekend” and other events and programs at the popular South Norwalk family attraction this winter at www.maritimeaquarium.org.