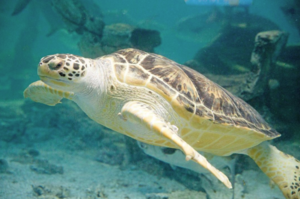 Two popular live-streaming educational animal programs offered by The Maritime Aquarium at Norwalk will be presented in Spanish on Oct. 7 and 14.

The Maritime Aquarium previously has offered programs with Spanish closed-captioning, but these two sessions will be the first to be led by a Spanish-speaking educator.

“We’re excited to be able to offer these programs to our Spanish-speaking audience,” said Tom Naiman, the Aquarium’s director of Education. “With the growing number of Spanish speakers in Norwalk and the region, and with the national – and international – reach of our virtual programs far exceeding our best expectations, we feel it’s important to become multilingual in our offerings.”

During “All About Seals” on Oct. 7, participants will be introduced to The Maritime Aquarium’s five harbor seals and get a keeper's-eye view of a seal feeding and training session. They’ll learn how seals are adapted to living in the marine world – including Long Island Sound – and get a peek at construction of the Aquarium’s new 150,000-gallon seal exhibit, due to open in April.

On Oct. 14, “All About Sea Turtles” will focus on the Aquarium's loggerhead sea turtle and two green sea turtles. Participants will learn how to identify different sea turtle species, get a behind-the-scenes look at their care in the Aquarium, and discuss ways to keep oceans and beaches safe for sea turtles.

The programs are interactive, with Aquarium educators able to respond to viewer questions.

The Maritime Aquarium has been offering a weekly slate of such live presentations about marine animals and the aquatic environment to the public for months, beginning with its COVID-19 shutdown in March and even now since its reopening on June 20. In addition, more than 25 virtual educational programs are available to schools. In total, the programs have been watched by more than 20,000 participants in 42 states, Puerto Rico, and six foreign countries.

There’s no set fee for any of the public virtual programs, including the two Spanish-language sessions; just a suggested donation is asked for each. Capacity is limited.

Advance registration is required so that participants can be emailed a Zoom web link. Only one person needs to register for a family.

Sign up – and learn more about the Connecticut attraction’s animals, exhibits, programs and more – at www.maritimeaquarium.org.