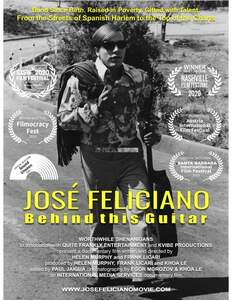 Norwalk, CT - On December 18 at 7:30pm at the Wall Street Theatre, the 2021 Norwalk Film Festival (NFF) will present, in its festival lineup, a special screening of “Behind this Guitar,” a documentary about the life and music of 30-year Connecticut resident, Jose Feliciano. The film outlines Jose’s remarkable journey from being born bind, raised in the slums of Puerto Rico, to becoming a 9-time Grammy Award-winner and an internationally famous music icon. Watch the film’s official trailer here: https://www.norwalkfilmfestival.org/behind-this-guitar. Tickets available here.

“Behind this Guitar” was completed just prior to the Covid-19 pandemic. Director Helen Murphy and Producer/Writer/Director Frank Licari were all set to premiere the film at the SXSW Film Festival when that festival was cancelled due to covid-19 concerns. The filmmakers were left to look for new opportunities to release the film to a national and international audience. While a disappointment on many fronts, it is a huge boon for the NFF to be chosen to screen the film publicly for the first time. Norwalk is also a fitting location given Feliciano’s long standing love and connection to the city of Norwalk. He recorded much of his recent album, “Behind this Guitar” at the Factory Underground in Norwalk, where he has also remotely telecasted performances on Late Night with Jimmy Fallon, and the Rachel Ray Show.  And, as filmmaker Licari stated, "Jose is perhaps one of the most under-appreciated musical performers of the last 50 years. His music has touched so many people across the world and it was a privilege to tell his story. Hopefully it’s a story that informs new generations on his brilliance."  Factory Underground is one of the sponsors and venues for NFF.

The 2021 NFF will open on Friday night, December 17 and run through Sunday evening, December 19. Screenings, panel discussions, and networking opportunities will be held at the following venues, who have generously donated space use: The Wall Street Theater, Factory Underground Studios, and Studio 67. All venues are conveniently aligned in the Wall Street area of the City to take advantage of the walkability of Wall Street; attendees can easily move between events, and enjoy the historic district.The NFF was founded by and operates with a grassroots community of volunteers comprised of filmmakers, cultural leaders, and movie lovers living and working in Norwalk. In the spirit of “Unity Through Diversity Through Film,” the festival leadership believes that cultural equity is a key component to long-term viability of a diverse and thriving artistic community. The goal of the NFF team is to bring together local communities and stimulate ongoing dialogues generated by the power of cinema.To learn more, or to inquire about sponsorship or volunteer opportunities, please email  This email address is being protected from spambots. You need JavaScript enabled to view it.  or visit www.norwalkfilmfestival.org
More About the Film:
Emmy-nominated, Addy and Telly Award winning writer, producer, director and actor Frank Licari, teamed up with thirty year music industry veteran, and first-time director Helen Murphy. The film is co-directed by Khoa Le, edited by Paul Jaigua, with cinematography by Egor Morozov. Murphy is the CEO of Anthem Entertainment, and former CFO of Warner Music Group and Martha Stewart Living Omnimedia. Among other accolades, Helen is ranked as one of Billboard’s 2020 Power 100.  Licari has written, produced and directed over 200 live and filmed productions across four continents including six feature films, three network television shows, hundreds of live theatrical productions including five Off-Broadway plays, musical concerts, and comedy events. Licari is the host of “On the Town” on PBS, and is a former Blue Man of the world famous Blue Man Group.

"Behind this Guitar" highlights insightful aspects of Jose Feliciano’s colorful career. Feliciano, who has been acclaimed by critics around the world as “the greatest living guitarist” has also been referred to as “the Picasso of his realm.” He has been awarded over forty-five Gold and Platinum records; he has won nineteen Grammy nominations, earning nine Grammy Awards, including the LARAS Award for Lifetime Achievement. His career has been immortalized with a Star on Hollywood’s Walk of Fame, while New York city honored him by renaming Public School 155 in East Harlem, “The Jose Feliciano Performing Arts School.”  Highlighted in the film is Jose’s 1970 writing of “Feliz Navidad.” With its simple, heartfelt lyrics - the traditional Spanish Christmas/New Year’s greeting “Feliz Navidad, prosero ana y felicidad,” followed in English with “I wanna wish you a Merry Chrtistmas from the bottom of my heart” - it has become a Christmas classic popular around the world. It’s altogether fitting that it would be screened by the Norwalk Film Festival one week before Christmas!The film also depicts Jose's unique stylized performance of the Star Spangled Banner in 1968 at Tiger Stadium in Detroit.  Although many artists have since stylized the song with their own flavor, including Jim Hendrix, Whitney Houston, and Beyoncé, Feliciano had been the first national artist to do this, and faced considerable controversy and backlash at the time. Yet the film comes full circle to his receiving a hero’s welcome back to Tiger Stadium, in one of the many poignant moments in the film.