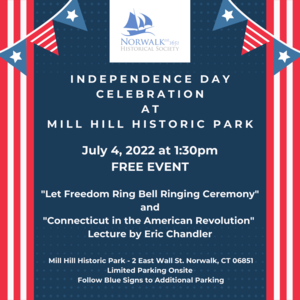 Join the Norwalk Historical Society for our first in person Independence Day celebration in two years!

At 1:30pm, the annual “Let Freedom Ring” Bell Ringing Ceremony will begin. The Town House bell will toll 13 times to commemorate the founding of the original 13 colonies. Norwalk Mayor Harry Rilling will take part in the ceremony and selected sections of the Declaration of Independence will be read by Norwalk’s Town Clerk, Rick McQuaid. The National Anthem will be performed by BMHS alumni, Bill King.

About “Connecticut in the American Revolution”: Despite being one of the smaller states, Connecticut played an extraordinarily large role in the American War for Independence. Connecticut government, people, industry and inventiveness helped pave the way to a remarkable victory against the superpower of the 18th Century. This presentation reviews the importance of Connecticut and those whose actions proved significant during the eight years of conflict. So, grab your cocked hat and buckled shoes, your quill pen and paper for a visit to Connecticut’s Revolutionary past.