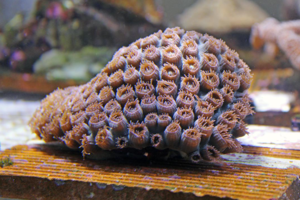 The Maritime Aquarium at Norwalk is one of 17 aquariums in the U.S. – and the only one in New England – tending to live corals rescued from Florida in an unprecedented effort to save North America’s largest bank reef.

Thirty-five corals, representing 13 different species, arrived at The Maritime Aquarium last month from the Florida Reef Tract, a 360-mile bank reef that extends from Port Saint Lucie down to the Florida Keys. In recent decades, the tract’s coral populations have been reduced by up to 90 percent, and a new epidemic – called stony coral tissue loss disease (SCTLD) – threatens to take much of the remaining corals.

In response, The Maritime Aquarium and 16 other select members of the Association of Zoos & Aquariums (AZA) are caring for healthy corals removed from the reef, with the hope of returning the corals to Florida when the SCTLD outbreak subsides. Nicknamed a “coral ark” after the Biblical story of Noah, such an effort has never been attempted before on this scale in the United States.

Maritime Aquarium guests can view the corals in a 1,000-gallon exhibit near the sea turtles.

“This is an unprecendented collaboration between federal and state wildlife authorities and public aquariums,” said Barrett Christie, the Aquarium’s director of Animal Husbandry. “Ultimately the creation of this coral ark is a last-ditch effort to preserve some of the reef tract’s biodiversity, and accredited aquariums and zoos were the only places with the husbandry knowledge and skills to pull off such a project in such a short period of time.”

According to the AZA, the purpose of the coral ark is two-fold: to prevent localized extinction for the most vulnerable species, and to maintain as much genetic diversity as possible for more than 20 species identified for eventual reef restoration.

As of this month, more than 1,500 corals have been placed in AZA institutions, with the eventual goal of 5,000 corals in additional facilities. Many of the species have never been placed in human care before. Some are listed as Endangered Species.

Corals and coral reefs are critical components of healthy oceans. They’re home to one-fourth of all marine species, yet cover less than one-tenth of the world’s oceans. Coral reefs also help to protect our coastlines by buffering wave energy during storms, and they’re a major economic driver for tourism and recreation.

Coral health is impacted by such factors as pollution, warming water temperatures and human misuse. There currently is no known prevention or cure for stony coral tissue loss disease, which was first observed on the Florida Reef Tract in 2014.

Barrett expects it to be several years before the SCTLD runs its course and the corals can be returned to Florida’s waters to help repopulate the reef tract. Meanwhile, the corals in their temporary home at The Maritime Aquarium have a constant 78-degree water temperature, specialized “grow” lights to encourage the corals’ symbiotic algae, and a steady supply of tiny tasty food.

“We’re prepared to give these corals a proper habitat as long as necessary, but look forward to the day that they can return to the reef tract and help it to recover,” Christie said.

In addition to displaying the live rescued Florida corals, The Maritime Aquarium on Dec. 14 is premiering “Great Barrier Reef,” a new IMAX movie that offers an awesome giant-screen exploration of one of Earth’s greatest natural wonders. The film introduces audiences to some of the creatures that live on the massive Australian coral reef, and documents the work being done by researchers and volunteers to better understand and protect the reef and its inhabitants.

“Great Barrier Reef” will play at 11 a.m. and 2 & 4 p.m. daily. A standard IMAX movie is included with Aquarium admission.

(A bank reef, like the Florida Reef Tract, and a barrier reef are different coral formations. A bank reef is closer to shore than a barrier reef, features “spurs” and “grooves” influenced by wave action, and lacks landward lagoons that are characteristic of barrier reefs.)

Learn more about the exhibits, IMAX movies and special holiday offerings at the popular South Norwalk family attraction at www.maritimeaquarium.org.