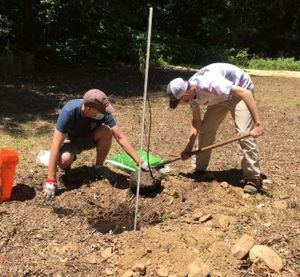 A stand of rare American chestnut trees has been planted at the White Barn Preserve in a collaborative between the Norwalk Land Trust and Eagle Scout candidate Oliver McGovern.

The site was once a tennis court at Lucile Lortel’s old White Barn Theater off Cranbury Road where the land trust holds an easement, a starting point for a fundraising campaign to purchase the entire 15-acre property as open space and a wildlife habitat.

Working with his father Brian and kid brother Shepherd, 11, Oliver, 17, put the chestnut seedlings into the ground at 20-foot intervals.

The McGoverns were assisted by two members of the board of directors of the Norwalk Land Trust, Kate Davies and Lynne Pratt, who erected wire fencing to protect the young plants.

“I am learning,” said Oliver, “how to handle the logistics and execution of a large-scale project and at the same time how to communicate.”

His work is to be evaluated by the Connecticut Yankee Council of the Boy Scouts which grants Eagle Scout recognition and is expected to issue a decision by the end of the summer.

Twenty-seven tracts covering more than 100 acres of open space in Norwalk have been conserved by the land trust, a volunteer-driven nonprofit headed by Seeley Hubbard.

To contribute to the fundraising campaign to conserve the White Barn Preserve and obtain additional information about the work of the Norwalk Land Trust, contact norwalklandtrust.org.

Ten seedlings in differing stages of early growth of growth--a mix of authentic American chestnut trees and two variants, the Allegheny chinquapin and the Ozark chinquapin—were put into the ground by the McGoverns.

They are blight-resistant plants acquired from nurseries in Vermont and Georgia and the Ozark Chinquapin Foundation in Arkansas, all specializing in reviving an American institution as distinct from the European and Chinese varieties of the tree and the common horse chestnut which is edible only by animals.

The White Barn grove is dedicated to the memory of Annie and Bill Moss, the late parents of a donor.         .

Once the most common tree in the Eastern U.S., the American chestnut was driven to near-extinction in the first half of the 20th century by a blight that originated in Asia and killed an estimated 3 billion trees.

Also, neither the European nor Chinese varieties incorporate all the highly adaptable values of the authentic American tree.

It was generally accepted that the nuts from a single mature American chestnut tree could feed a family of four for a year, roasted fresh, ground into flour or dried and reconstituted.

Scientists who have genetically engineered blight-resistant plants estimate that farmers could grow the same number of calories per acre at a lower economic and ecological cost than conventional crops like wheat, rice, corn and potatoes.

The White Barn property is located on the Norwalk-Westport border and is enhanced by woodlands, meadows, a pond and a small creek called Stony Brook.