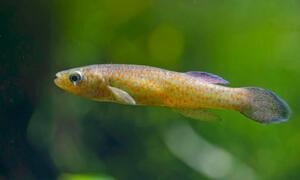 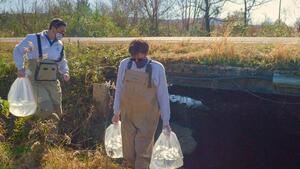 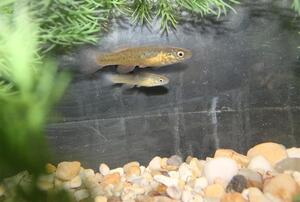 About two dozen fish raised in The Maritime Aquarium at Norwalk recently were turned loose into a remote ancestral stream in Tennessee, the latest release that’s part of a shared effort to save its endangered species.

The fish – the Barrens topminnow (Fundulus julisia) – is a colorful 4-inch-long fish found only in streams and springhead pools on the Barrens Plateau in middle Tennessee. Due to declining numbers and loss of critical habitat, the species was officially classified as Endangered by the U.S. Fish and Wildlife Service in October 2019.

The plight of the species has long been known by the Tennessee Aquarium in Chattanooga, which started a project to save the species nearly 20 years before the federal classification. After working for years with local partners, including the Tennessee Wildlife Resources Agency and Knoxville-based Conservation Fisheries, Inc., the Tennessee Aquarium put out a broader call for support in 2018 to fellow members of the Association of Zoos & Aquariums.

The Maritime Aquarium, along with the John G. Shedd Aquarium in Chicago, answered the call. The two aquariums have been raising Barrens topminnows and sending fish back to Tennessee since. (The National Mississippi River Museum & Aquarium in Dubuque, Iowa, also is participating but is yet to produce any offspring.)

Over the last two years, more than 100 Barrens topminnows raised at The Maritime Aquarium have been released in Tennessee. More currently are being raised in Norwalk for future releases.

Bert Sadler, a Maritime Aquarium aquarist who has been tending the topminnows in Norwalk, said such partnerships increase the chance of success.

“By spreading the effort, we can do more to help species that need assistance,” Sadler said. “With more institutions helping, we can double or triple the effort and make that much more of an impact.

“Every species is important, whether it be a small fish like the Barrens topminnow or something as large as an elephant,” he added. “Losing even the smallest species can have a profound impact on an ecosystem. As such, we should do all we can to help any species that needs assistance.”

Matt Hamilton, curator of fishes at the Tennessee Aquarium, welcomes the additional help. The goal is to create an “ark,” a large-enough – and genetically diverse-enough – population in human care to bolster the overall numbers and to ensure no single institution is solely responsible for the endangered fish’s survival, he explained.

“You really can’t do any conservation work in isolation,” Hamilton said. “These kinds of projects take partnerships and cooperative effort with multiple institutions and conservation groups coming together to work toward a common goal.”

That the assistance is coming from aquariums in Connecticut and Illinois with no direct connection to Tennessee or its native species just makes it even more meaningful.

“For them to care and be willing to join in helping us to raise animals and send them back to us so we can release them as part of the recovery effort — that’s huge,” he said. “I’m just so thankful that they were willing to take the time and put forth the effort and resources to work with us to help be a part of this project.”

More details of the Barrens topminnow’s federal listing as an endangered species can be found at www.fws.gov/southeast/wildlife/fishes/barrens-topminnow/

Learn more about The Maritime Aquarium’s other conservation efforts, as well as current exhibits and programs, at www.maritimeaquarium.org.