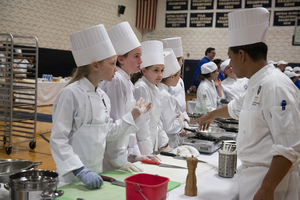 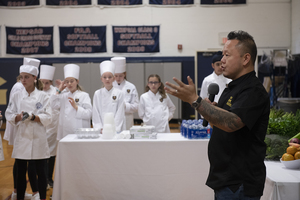 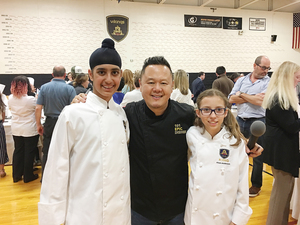 The heat was on, the timers were set, and all eyes were on seven Middle School students competing in the King Cares Cooking Competition earlier this month. Two hours later and three courses consumed, the King team was announced as the winner.

Two years ago, Lelio Vieux, King Director of Dining Services, pitched an idea of offering cooking classes to MS students, with the meals students prepared being served to people in the local community. The Middle School was excited to integrate more service projects into the students’ day, so King Cares Cooking was born! Over the course of the school year all Grade 6 students took a cooking class and then had the opportunity to go to either Inspirica or New Covenant Center to serve the meals. The idea of the cooking competition, in a similar format as Food Network’s Cutthroat Kitchen, was the next part of the cooking program. The classes and competition went so well last year, that there was no doubt we had to make this a tradition. This year the competition grew to include four schools: Wooster School, Christian Heritage School, Fairfield Country Day School, and King School.

Seven students representing King were accepted into the competition. They worked with Chef Estwardo after school in the weeks leading up to the competition to learn additional skills, but not just related to cooking. “The Cooking Competition was a wonderful opportunity for students to work as a team, and discover the best ways to collaborate and communicate with each other, especially while performing under pressure. They also got the opportunity to practice and develop their cooking skills, doing it all in a fun, supportive environment,” said Karen Raidt, Director of King Cares Service.

Celebrity Chef Jet Tila promoted team building as the basis of the competition. He met with students before the competition and discussed the meaning of the event and that the purpose is not just to win. "Winning is great but that's not why we do these things. The idea is to have fun, work together and raise money for local organizations," he said.

“It was exciting to watch all of the Grade 6 students this year during the cooking classes in the US dining room. They learned various cooking techniques and about kitchen safety while preparing and then serving meals that would help others in the Stamford community,” shared Raidt. Congratulations to our MS team!

Learn more about King School by scheduling a tour or by attending Coffee and Conversation on July 23. Click here for information.