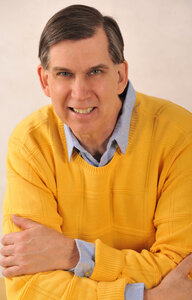 Mike Krysiuk is happy to be alive. In 1974, he was a Staples High School senior who’d hit his stride: a star pitcher with popular friends and great grades. Good things were coming his way, until one bad decision — “riding shotgun” on a beer run with a cocky classmate — changed his life forever. Mike’s new memoir, The Big One: Miracles Happen When You Shoot for the Sun (September 2020, Beyond Publishing), co-written with accomplished writer Julia Bobkoff, chronicles his miraculous comeback from the unimaginable, fueled by dogged determination and a dream. The Big One is the inspirational story of Mike’s perseverance, of family teamwork, of resolute optimism; its powerful message of hope is contagious. Fairfield University Bookstore will host the virtual book launch of The Big One on Thursday, January 14 at 7:00 p.m.; the community at large is invited to the free Facebook Live event. Mike will be interviewed by his co-author, Julia, followed by a Q & A, and 70s music trivia for signed books. Attendees should join Fairfield University Bookstore’s Facebook page a few minutes prior to the launch event at https://www.facebook.com/FairfieldUBookstore. To purchase a book via the store’s website, visit https://www.bkstr.com/fairfielddowntownstore/product/big-one-145753-1.

Mike Krysiuk grew up in idyllic Westport, Connecticut, where he hung out at Compo Beach, worked at Mario’s restaurant, and played baseball for the Wreckers. He was a regular guy. Until a life-altering car crash left him with a traumatic brain injury, broken bones, and a 7-week coma. Standing six-foot-four, with an over-sized personality to match, Mike was given a nickname both at home and around town—“The Big One.” The spring prior to graduation, Mike so yearned to be part of the “in” crowd that he skipped classes, engaged in uncharacteristic antics to impress his peers, and ultimately “walked in other people’s shadows,” (as he terms it), rather than staying true to himself. For that, he paid a hefty price.

Fortunately, with a winning combination of faith, medicine, and his family’s relentless positivity, Mike miraculously recovered. After much rehabilitation, he completed his coursework and graduated from Staples to eventually begin a new life to include college, a career, marriage, children, performing guitar, and acting for stage and film. Mike’s story is geared for not only a young audience, but also those of all ages to warn of the dangers of “shadow walking.”

“I want my personal tragedy to stop teenagers from recklessly drinking and driving and start choosing leadership and good judgement. I wrote The Big One to document my unlikely and phenomenal recovery, to encourage perseverance despite despair, and to instill hope where there seems to be none. I’m thrilled to both discuss and celebrate my book online through Fairfield University Bookstore’s platform,” said Mike.

Mike’s life story was also captured in the play, “I Don’t See My Shadow,” performed in 2016 at the Westport Historical Society (now the Westport Museum for History and Culture) to favorable reviews. In addition, the film script is complete, and the Mike-Julia writing team anticipate The Big One will grace the big screen to boot.

“Working with Mike was a seamless process from start to finish. His dedication to sharing his inspirational and motivational story energized both of us during over a year of hard work. My contribution was to capture Mike’s voice and help provide a narrative framework for 40 plus years of memories, as well as bring to life a time, a place, and the people who loved and supported him when he needed it most. Mike is a living miracle—proof of what happens when you always shoot for the sun,” said Julia.

Mike Krysiuk has worked at Westport’s Town Hall for nearly 25 years, where his friendly and positive presence makes paying taxes as close to a pleasure as it can be. He has done stand-up comedy, lectured on his life, and performed (voice and guitar) his original songs in local venues. He knows he came back from the edge of death for many purposes, including sharing his wisdom so the next generation won’t forget his hard-earned lessons — and to always “shoot for the sun.” For more information about Mike or to book him for an author appearance, visit https://www.shootforthesun.com/.

Julia Bobkoff is a multi-award-winning writer in film, TV, fiction, poetry, and non-fiction and is the grand prize recipient for Best Drama in the 2016 Launch Pad Manuscript Competition. She adapts best-selling books to screen and works as a script consultant and writing coach, collaborating with people both famous and unknown to bring their stories to life. She’s also a sought-after recording artist (violin and viola). She holds a B.A. in English with honors from the University of Rochester, studied violin at Eastman, and attended NYU’s graduate film directing program. She is currently writing a script based on her life, which she plans to direct, and is involved in producing a feature film. In addition, Julia is co-founder of Christmas Lake Creative, a full-service writers’ workshop located in Westport, Connecticut and con be contacted via the website, https://www.christmaslakecreative.com/.