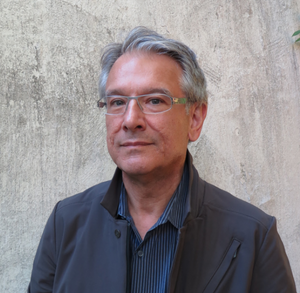 Klein said: “Looking back, other than art, what’s kept me engaged with the Museum has been the incredibly talented and passionate people I’ve had a chance to work with. Obviously, there have been the artists – who have taught me so much – but there are also the staff, volunteers, members and trustees who have inspired me over the years and helped me realize my vision of what a contemporary art museum should be.”

Board Chair Diana Bowes shared: “Over his thirty-year plus tenure, Richard Klein has helped The Aldrich build a strong foundation of artist-centric programs and visionary exhibitions. A virtual walking encyclopedia of all things Aldrich, Richard is a young soul who has embodied the spirit of the Museum – curiosity, energy, a sense of adventure. We are deeply grateful for the care Richard has taken in shaping the Museum and wish him all the best in his future endeavors.”

Cybele Maylone, Executive Director, shared: “It’s hard to believe that The Aldrich existed before Richard’s arrival. For over three decades he has been a guiding force at the Museum, shepherding generations of artists through our galleries, building community, and serving as a valued colleague for everyone on our staff. While his departure is bittersweet, we will continue to enjoy the fruits of Richard’s career at the Museum, and the incredible program he has been instrumental in building.”

Klein began working full-time at The Aldrich in 1990 as the Registrar and Preparator. He worked closely with the Museum’s founder Larry Aldrich until his passing in 2001 and has had a hand in nearly every aspect of the Museum’s operations. In 1994, he became acting director for just over a year, the first of several occasions where he acted as interim director of The Aldrich. During that time he curated his first exhibitions at the Museum, most notably including Drawn on the Museum, a group exhibition of site-responsive wall drawings that featured the work of fifteen artists, including Karen Finley, Sol LeWitt, Dorothea Rockburne, Nancy Spero, Martin Wong, and the graffiti artist Daze.

Since his early curatorial pursuits, he has curated or co-curated over 95 exhibitions in both The Aldrich’s original “Old Hundred” building, now the Museum’s administrative offices, and the new Museum building which opened in 2004. During his time at The Aldrich, Klein has worked with hundreds of artists, including Janine Antoni, Frank Stella, Sol LeWitt, Mark Dion, Kay Rosen, Kim Jones, Hank Willis Thomas, Brad Kahlhamer, Roy McMakin, Mary Temple, Nancy Shaver, Jessica Stockholder, Tom Sachs, and Elana Herzog. Major curatorial projects at The Aldrich have included: Fred Wilson: Black Like Me (2006), No Reservations: Native American History and Culture in Contemporary Art (2006), Elizabeth Peyton: Portrait of an Artist (2008), Shimon Attie: MetroPAL.IS. (2011), Michael Joo: Drift (2014), Taylor Davis: If you steal a horse, and let him go, he’ll take you to the barn you stole him from (2014), Alex Schweder and Ward Shelley: Your Turn (2017), Weather Report (2019), and Twenty Twenty (2020). Klein is also the curator of Duane Slick: The Coyote Makes the Sunset Better, which will be on view at the Aldrich from January 16 to May 8, 2022.

Artist Mark Dion, whose first major survey exhibition in the United States Full House was organized by Klein at The Aldrich in 2003, shared: “Over three decades I have been fortunate to work with remarkable curators, Richard Klein being among the boldest, most visionary among them. Over his years at The Aldrich, Richard has worked with well over 100 artists fostering their visions and materializing maverick and complex exhibitions. He is truly among the nation’s greatest contemporary art curators.”

“Working with Richard over the course of a couple of years on a major new project and exhibition for The Aldrich was a deeply meaningful and lasting experience for me. Not every curator knows how to work with artists, but Richard certainly does. He was pro-artist and pro-art all the way, from beginning to end. I will always value our collaboration, and I wish Richard the very best for what awaits him in the next chapter of his life!” shared artist Shimon Attie, whose exhibition MetroPAL.IS. was on view at the Museum in 2011.

Artist Jessica Stockholder said: “When I exhibited at The Aldrich at Richard’s invitation, it was a surprise to discover the depth of his interest in my work; he really wanted to talk about the work! And it was great to discover our mutual fascination with trees. From these conversations flowed a project that wouldn’t have happened anywhere else; one that intersected not only museum resources, but also carpentry and printing talent from the community that had been cultivated over time in response to Richard’s exuberant and respectful curiosity. In the face of the plurality of Richard’s interests, what’s so remarkable about his curatorial vision is that it is consistently rooted in an exploration of how the visual and physical products of human labor reveal themselves to be value laden. Richard recognizes authentic and genuine care as it is expressed in human making, especially in art, but also in the whole human made landscape he is always scanning.” Stockholder’s exhibition Hollow Places Court in Ash-Tree Wood was on view at The Aldrich in 2011.

Artist Hugo McCloud shared: “As an artist whose practice is intertwined with my upbringing, it can take a lot of patience to understand the meaning and thought process behind who I am and what I make. Richard takes the time, and is a special person in this way, as he enthusiastically commits to his practice. In our many talks Richard would ask questions to understand my process, but also because his research would raise questions that in turn would prompt me to think and reevaluate ideas. Knowing that outside of working with the Museum he himself is a creator there were many insights to materials and practices that I found to be quite helpful. The simplest way to put it is Richard cares, cares about the artist, the work, and cares about the story he is curating. This is special—I thank him for finding my story and work valuable enough to dedicate the time to tell it.” McCloud’s exhibition from where i stand was on view at The Aldrich in 2021.

In addition to his work at the Museum, Klein is an artist and a writer. His essays on art and culture have appeared in Cabinet Magazine, and have been included in books published by Hatje Cantz, Damiani, Picturebox, Ridinghouse, and the University of Chicago Press, among others. Klein looks forward to organizing his final exhibition at The Aldrich opening in early 2023. He will be pursuing independent projects as well as creating and exhibiting his own work.