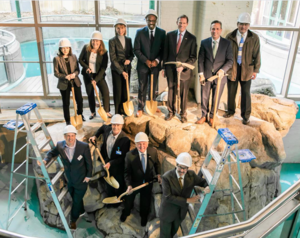 Federal, state and local officials ceremonially broke ground at The Maritime Aquarium at Norwalk Nov. 18 on a new seal exhibit and 4D movie theater, part of the popular attraction’s advance response to the rebuilding of an adjacent railroad bridge.

Funded with state and federal dollars through a $40 million “functional replacement” agreement, the simultaneous projects are expected to be completed in a year and create:

• a seal exhibit that will reach up to the original exhibit’s balcony level and be fully enclosed by a new exterior wall. At 150,000 gallons, the seals’ new home will be The Maritime Aquarium’s largest exhibit – seven times bigger than their original exhibit.

• a 179-seat 4D theater that will feature 3D digital projection, proprietary 4D sensory seats and other in-theater special effects, as well as a selection of educational and seasonal films. The new theater will be multipurpose and have a stage for lectures and other presentations.

Jason Patlis, president of The Maritime Aquarium, said completion of the projects in late 2020 will help the Aquarium realize its full potential, “not just as a beloved regional attraction but as a vital conservation leader and cultural voice for Long Island Sound and the global ocean.”

“The ocean has a tremendous story to tell us,” Patlis said. “It is not just about the amazing biodiversity that is on display here, with our jellies, sea turtles, seals, sharks and rays, but it is also about the very way human history and society have been shaped by the ocean – our culture, commerce, economy, arts, literature, sports. All have a connection to the ocean. That is the story waiting to be told, and with our new exhibit and new theater, we will no longer need to wait to tell it.”

During the event, U.S. Sen. Richard Blumenthal, State Sen. Majority Leader Bob Duff and Norwalk Mayor Harry Rilling each spoke on the vital role The Maritime Aquarium plays in the city, state and region’s educational community and economy, and the importance of replacing and protecting the Aquarium’s assets through the Walk bridge work.

The Walk bridge is a swivel railroad bridge runs between the Aquarium’s main building and its IMAX Theater. Built in the 1880s, it sometimes has stuck open in recent years, shutting down MetroNorth’s New Haven Line and Amtrak’s Northeast Corridor. The multi-year replacement of the bridge, expected to begin in 2021, requires removal of the Aquarium’s iconic IMAX Theater and a riverfront structure that is home to the “Meerkats” exhibit and the seals in their current temporary space (the former “Go Fish” exhibit).

Spectacular movies will continue to play daily on the Aquarium’s six-story IMAX Theater screen through December 2020.

The dual projects were designed by the architectural firm Beyer Blinder Belle. Owner’s rep is CSG Construction Solutions Group, with construction managed in a joint venture of AP Construction and O&G Industries.

The Maritime Aquarium at Norwalk is a not-for-profit organization whose mission is to educate visitors about – and to create stewards for – Long Island Sound. It accomplishes this by allowing visitors to get close to some 300 species native to the Sound and its watershed, including sharks, seals, sea turtles, river otters, jellyfish and other animals. One of the top places for family fun in Connecticut, the Aquarium also features standards-based educational programs, public study cruises out onto the Sound, and Connecticut's largest IMAX movie theater.