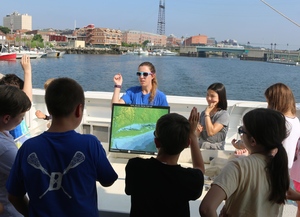 For the fourth time in five years, The Maritime Aquarium at Norwalk is being honored for one of the best educational initiatives of any zoo or aquarium in America.

The Maritime Aquarium’s “Sound Resilience: Get on Board!” program – a four-year public outreach that included engaging middle- and high-school students in modeling how to brace our coastline against climate change – received a Significant Achievement Award in Education during the Association of Zoos & Aquarium’s annual conference this week.

The AZA is the organization that sets the top standards for animal care, education and guest safety at North American zoos and aquariums. Currently, 240 institutions meet the strict criteria for AZA accreditation.

“That The Maritime Aquarium continues to win national awards against the biggest zoos and aquariums in the country reflects the quality of our work and the talents of our staff,” said Jason Patlis, the Aquarium’s president and CEO. “More importantly, the awards reflect our intense dedication to tackling difficult issues like climate change and its impacts on coastal communities along Long Island Sound, and our creativity in bringing those issues to life for students throughout the state.”

Over the past four years through “Sound Resilience: Get on Board!,” more than 2,000 middle- and high-school students from 11 Fairfield County towns explored how severe storms, erosion and other environmental hazards threaten their communities, and also how they can participate in lessening the effects. Education and research occurred in school classrooms and out on Long Island Sound aboard the Aquarium’s research vessel.

An additional component of the effort focused on expanding public knowledge of how extreme weather events threaten our coastal communities and the Long Island Sound ecosystem. To accomplish this, the Aquarium created a new exhibit, “Long Island Sound: From Risk to Resilience,” where guests learn about the impact of storms and climate change on local communities.

The exhibit and the education program for students utilized resources provided by the National Oceanic and Atmospheric Administration (NOAA), which funded the “Sound Resilience” program through a 2016 grant of $484,955, the largest federal award in the Aquarium’s history. The grant funding made the program free to schools in Greenwich, Stamford, Darien, New Canaan, Norwalk, Westport, Wilton, Weston, Fairfield, Bridgeport and Stratford.

Naiman said “Sound Resilience” provided students and teachers with new perspectives on the impact that climate change and extreme weather have on their towns and coastal ecosystems.

“By engaging people with real-world science on shore and on the water aboard the Aquarium’s research vessel, we are building stewardship that will support the well-being of our neighbors along Connecticut’s coast and the health of the Long Island Sound ecosystem in their backyard,” Naiman said.

Learn more about the Aquarium’s educational programs, including a slate of new distance-learning programs for schools, at www.maritimeaquarium.org.