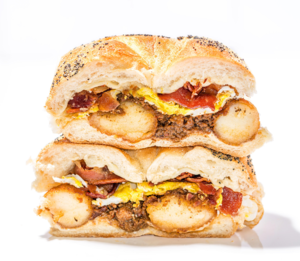 The Hotsy is Garden Catering’s twist on a traditional northeast classic breakfast sandwich, the bacon egg & cheese. This winner has the required bacon, egg, and cheese but reaches legendary status with the addition of potato cones (think crispy mashed potato balls) and Hotsy’s famous spicy chili all piled high on a New York style hard roll.

The sandwich was first introduced at Garden Catering in the 1990’s when Bertino, already in his eighties, started working the morning shift at the original Garden Catering location. The restaurant veteran shared his then famous chili recipe with owner Frank Carpenteri Sr. Said
Carpenteri Sr., “Hotsy had this incredible chili recipe that he proudly shared with our guys. We started making it as soon as Hotsy started working with us, and eventually it became so popular we named a sandwich after it. On Hotsy’s 90th birthday back in 2010, we celebrated by selling .90 cent Hotsy’s. Hotsy was in his glory that day, it was so special for all of us.”

The Hotsy is also available for Garden Catering fans nationwide via Goldbelly, a delivery platform that the brand partners with to ship their hand cut chicken nuggets, whose legions of fans include Justin Beiber, Scooter Braun and NBA star Donovan Mitchell.

To celebrate the win, Garden Catering will host a “Hotsy Day” in all 8 Garden Catering locations Tuesday, October 27 and the sandwich will sell for $2 each. In addition, Garden Catering is supporting its continued effort to give back to the community by donating one dollar for every Hotsy sold to CORE (Children of Restaurant Employees), whose mission it is to provide financial relief when a food and beverage employee with children faces a health crisis, injury, death, or natural disaster.

Tina Carpenteri, daughter of owner Frank Carpenteri Sr., currently runs the business with her brother Frank. She commented; “Hotsy worked in the restaurant business for years, and in doing so was able to support his family. We think the purpose of CORE ties into both our values
and the values that Hotsy held. We miss him greatly but will continue to honor his legacy through The Hotsy, and our continued contributions to organizations like CORE.”