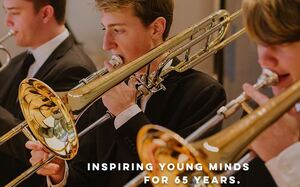 Norwalk Youth Symphony to offer virtual seminars for adults on music history, the Met Opera’s use of media, and, for young musicians, correct practice techniques

Norwalk Youth Symphony (NYS) announces it will be hosting a series of virtual seminars beginning in January geared to adults and young musicians in greater Fairfield and Westchester counties. The seminars for adults will provide an in-depth look at the leading figures and developments that continue to influence music today.

For young musicians, the seminar lineups include a session on practice techniques for string musicians and a fast-paced overview of 1,000 years of music open to area high school students and musicians in the NYS Principal and Concert orchestras.

All sessions will be available via Zoom technology.

Led by NYS conductors and noted musical scholars, the one-hour adult seminars will examine a variety of historical influences on music today, such as women composers’ contributions to the American classical movement in the early 20th century; the lasting impact of the Harlem Renaissance led by musicians such as Louis Armstrong, Duke Ellington and Ma Rainey; and an exploration of the dynamic life of Alma Mahler, a fine composer in her own right whose relationships with many of the leading composers and artists of the day will serve as a guide to the artistic visionaries in Vienna.

In a special session on How the Met Uses Media, Mary Jo Heath, the host of the Metropolitan Opera broadcasts, will describe the history of the Met’s radio and television broadcasts and the initiatives the Met is using to keep opera audiences engaged during the pandemic. This seminar is scheduled for Feb. 1 at 7 p.m. Dr. Heath is only the fourth host of the broadcasts since they began in 1931. Prior to her becoming the host, she was its Senior Radio Producer. Heath holds a Ph. D. in music theory from the Eastman School of Music. Fees from this seminar will be donated to the Met Opera Musicians Fund.

The adult seminar series kicks off Jan. 6, at 7 p.m. with Women and the American Sound, led by Sigrid Karlstrom, DMA, who will speak about the struggles and triumphs of American women composers as the country was setting about to establish a classical music tradition in the United States. Dr. Karlstrom, an orchestral and chamber musician who now teaches in Fairfield and New Haven counties, played as a tenure member of the New Mexico Philharmonic and as principal violinist for Opera Southwest and was featured regularly in a contemporary chamber series in New Mexico.

On Jan. 10 at 2 p.m., NYS conductor Rafael Videira, DMA, will lead a seminar on Practice Techniques for Strong Players designed for musicians in late middle school and high school, teaching the young players how to employ efficient techniques to practice with their instruments. The session also aims to demonstrate the importance of healthy practice habits to avoid playing-related injuries. The seminar will be split between a lecture/discussion and workshop formats and aims to enable the player to develop their artistry through performance.

Other sessions include: 1,000 Years of Music in 60 Minutes, led by Concert Orchestra Conductor Russel Ger, is slated for Jan. 13 at 7 p.m. In an hour, Ger’s session, designed for high school students and members of the NYS Principal and Concert orchestras, will explain what people mean when they discuss Romantic or Baroque music movements and answer questions, such as whether Mozart and Tchaikovsky ever sat down to brunch together. The whole millennium of music will flash by in moments under Ger’s direction.

In a session for adults, NYS Principal Conductor Jonathan Yates, joined by his sister, Carolyn Yates, an art historian with the U.S. State Department, will spotlight The Fascinating Life of Alma Mahler, wife of Gustav Mahler, who was known as a remarkable influence in art and music in her own right. Scheduled for Jan. 21 at 8 p.m., Alma Mahler’s life will serve as a figurative guide to the worlds of art and music in early 20th century Vienna, a time when she dealt with the challenges of being a female composer whose own musical talents were overshadowed by the well-known men, such as Gustav Klimt, Walter Gropius and Oskar Kokoschka with whom she had relationships.

In a seminar designed for parents of young musicians, NYS Philharmonia conductor Jessica McNamara will provide insights on Developing Intrinsic Motivation in Your Young Musicians during a session Jan. 26 at 8 p.m. As the old joke asks: “How do you get to Carnegie Hall?” With the response being: “Practice, practice, practice.” The reality of music practice for young musicians is often more parent-driven than envisioned. McNamara draws on current research in the fields of motivation, grit, mindset and habits to give parents concrete strategies to help children develop their own motivation to practice.

Seminar participants will take a virtual A train, the quickest way to Harlem, to learn about The Roaring Harlem Renaissance, during the Feb. 4 seminar at 8 p.m. where the guides, again Jonathan Yates and his sister, Carolyn Yates, will describe the leading lights of the period that led to an explosion of Black artistry across literature, music and art. In the 1920s and beyond, it was a time of Langston Hughes, Zora Neale Hustron and Claude McKay in literature; to the syncopation of Armstrong and Ellington and the blues of Ma Rainey; to the art of Aaron Douglas, Richmond Barthé and James Van Der Zee and the illumination of the Black experience of the time.

The adult fees are $20 per session, with a five-session fee priced at $75*. The Practice Technique for String Players is $10. To sign up for the seminar sessions, register at Seminar Registration 2021 (formsite.com).

*The session on How the Met Uses Media is not included in the five package series; instead, revenues from that seminar are earmarked for the Met Opera Musicians Fund. Fee for this class is $25. Parents interested in having their children in grades four through 12 join NYS may learn more and register on the NYS website (www.norwalkyouthsymphony.org).

They may also contact Sara Watkins at the organization’s office, 203-866-4100 or by email, This email address is being protected from spambots. You need JavaScript enabled to view it. for questions regarding the Seminars or any NYS program