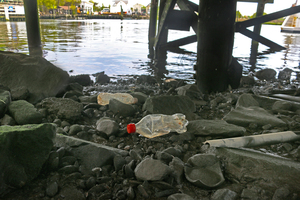 The Maritime Aquarium at Norwalk welcomed groundbreaking legislation introduced today by U.S. Sen. Tom Udall (D-NM) and Rep. Alan Lowenthal (D-CA), with Sen. Richard Blumenthal (D-CT) as a co-sponsor, that is the first comprehensive bill in Congress to address the plastic pollution crisis.

• Ban certain single-use plastic products that are not recyclable.

• Prohibit plastic waste from being shipped to developing countries.

• Place a temporary pause on new plastic facilities until the EPA updates and creates important regulations on those facilities.

“While municipalities and even eight states have passed bans on certain types of single-use plastic, now is the time for our country as a whole to join in solidarity in this movement,” said Jason Patlis, president and CEO of The Maritime Aquarium. “The Break Free from Plastic Pollution Act is the exact type of legislation we need to protect our public health, our wildlife, and our wild places.”

The Maritime Aquarium in early 2018 eliminated nearly all single-use plastics from its operations, and since has endorsed the efforts of local municipalities to ban similar plastics, such as straws and carry-out market bags. The Maritime Aquarium recently joined the Aquarium Conservation Partnership, a group of 22 AZA-accredited aquariums in 17 states working together to reduce the sources of ocean and freshwater plastic pollution through a mix of consumer, business and policy strategies.

Today in proposing the legislation, Udall and Lowenthal said the Act was drafted after several months of stakeholder input from over 200 individuals, environmental groups, businesses, trade associations, aquariums, academics, and state and local governments.

Learn more about The Maritime Aquarium’s conservation efforts, as well its exhibits, events, IMAX movies and more, at www.maritimeaquarium.org.