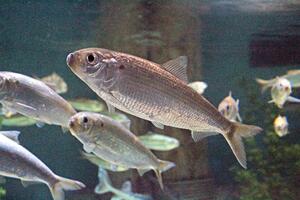 The Forage Fish Conservation Act (FFCA) would amend the Magnuson-Stevens Fishery Conservation and Management Act, the primary law that governs ocean fish management in U.S. federal waters. While not naming specific species, the Act addresses the important ecological role of such schooling fish as menhaden (or bunker), anchovies, herring and shad.

“Forage fish are migratory, and the populations in offshore federal waters find their way into Long Island Sound, so protecting these species in federal waters has direct benefits for the Long Island Sound ecosystem,” said Jason Patlis, president and CEO of The Maritime Aquarium. “These fish also are vital to the Sound’s multimillion-dollar recreational fisheries for bluefish, striped bass and other game species. Additionally, as we have seen in recent years, humpback whales and other marine mammals have returned to Connecticut and New York waters in large part because of the forage fish on which they prey.”

Long Island Sound has been flush with bunker in recent summers. The fish were in the news this month because of die-offs in harbors all along Connecticut’s shoreline. Experts said the die-offs occurred not because of a water-quality issue, but perhaps because unseasonably warm temperatures caused the fish to delay their annual migration out of the Sound. This resulted in a percentage of the fish dying as food sources diminished and the water chilled.

Menhaden are commercially harvested on the East Coast, with most of the catch rendered into oil and fish meal for dietary supplements, as well as for feed for livestock and aquaculture. In Connecticut, state rules prohibit large-scale intentional menhaden harvests in Long Island Sound waters, although incidental catches are permitted within limits.

A coalition that includes The Maritime Aquarium, Mystic Aquarium and Audubon Connecticut are supportive of the legislation and will work cooperatively to help educate the public with the goal of passage of the Forage Fish Conservation Act.

“The many forage fish species that occur off the northeast coast provide critical food for ecologically and economically important species such as tuna, cod, striped bass, and bluefish as well as for sharks, marine mammals, seabirds, and other animals that are integral to healthy ocean ecosystems and sustainable fisheries,” said Dr. Peter J. Auster, senior research scientist at Mystic Aquarium. “Forage species are critical links between plankton – the base of ocean food webs – and higher trophic level predators. Currently there is no management plan for many forage species, so there is no mechanism in place to minimize the potential for significant declines with resulting ecosystem impacts. The Forage Fish Conservation Act will address these problems within the larger context of federal fisheries and ocean management."

Ana Paula Tavares, executive director of Audubon Connecticut and Audubon New York, said common and roseate terns, among other Long Island Sound-based birds such as osprey and cormorants, depend on forage fish to survive and raise chicks.

“But forage fish populations are declining and shifting in range, which threatens birds and people that depend on them,” Tavares said. “The Forage Fish Conservation Act is essential to protecting wildlife, and recreational fishing industry jobs, in Connecticut and beyond. We thank Senator Blumenthal for introducing this bill, and both Senator Blumenthal and Senator Murphy for their tireless work in support of a healthier Long Island Sound."

Other organizations lending their support are The Connecticut Ornithological Association, the Long Island Soundkeeper, the Menunkatuck Audubon Society, and the New Haven Bird Club.

Learn more about The Maritime Aquarium’s conservation efforts, as well its exhibits, IMAX movies, holiday offerings and more, at www.maritimeaquarium.org.