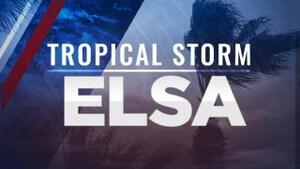 Governor Ned Lamont today announced that he has submitted an agricultural disaster declaration request to the U.S. Department of Agriculture for the State of Connecticut as a result of damage sustained to farmers from the impact of Tropical Storm Elsa in early July.

The request follows several weeks of assessments that are required before an application can be submitted. During the assessment phase, Governor Lamont directed Connecticut Agriculture Commissioner Bryan P. Hurlburt and senior members of his administration to tour agricultural facilities and farms throughout the state to see firsthand the damages and crop loss that occurred.

If approved, the declaration will make farmers in all eight Connecticut counties eligible for certain federal disaster assistance programs, such as emergency loans, to cover production losses they experienced as a result of the storm.

“Farm owners are small business owners, and not only are they responsible for employing a significant number of people and generating economic activity, but they grow the food that we all rely on,” Governor Lamont said. “Any bit of relief from the damage sustained during this tropical storm will be an aid to these farmers. The USDA has been a great partner to Connecticut, and I appreciate their assistance on this recovery effort.”

“In the aftermath of Tropical Storm Elsa, the Connecticut Department of Agriculture worked in coordination with the USDA Farm Service Agency to ensure that producers reported damages and crop loss within the required timeframe,” Connecticut Agriculture Commissioner Bryan P. Hurlburt said. “The reports submitted indicate that damages and crop losses are significantly above the 30% trigger to request the declaration. If approved, this will provide assistance to eligible producers in approved counties to ensure they have the tools needed to continue for future seasons.”

The National Weather Service recorded wind speeds between 39 MPH and 42 MPH across Connecticut during the storm, and rainfall between 1.5 to 5 inches. Additional thunderstorms in the days following further complicated the recovery, increasing the month of July’s rainfall between 104% to 382% across the state.