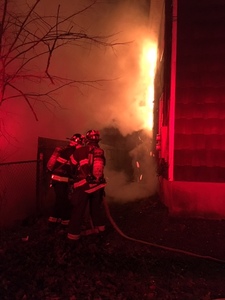 The Norwalk Fire Department responded to a structure fire at 16 Lexington Avenue, Christmas Night, at 10:45 p.m. Upon arrival the 2 story wood frame, up and down duplex had heavy fire showing out a side bedroom window and fire was auto exposing into the second floor bedroom above. The radiant heat from the fire also melted the exterior siding of the house next door. Fire crews advanced fire hoses into each floor and quickly knocked down the flames within 10 minutes, but the heat and smoke damage had already been done to each floor. The fire was placed under control within 10 minutes of arriving on scene.

Fire Inspector Corey Gilchrest and Deputy Fire Marshal Kirk McDonald are investigating the cause of the blaze. Three engines, two trucks, a rescue and command car responded with 25 firefighters.