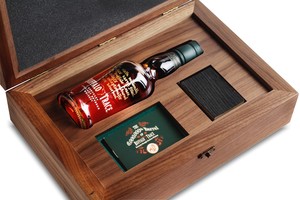 Acts 4 Ministry, Inc., the non-denominational charity serving the Greater Waterbury region is currently auctioning a rare, highly-distinguished, historic Buffalo Trace Kentucky Straight Bourbon Whiskey from the distillery’s sixth millionth barrel that has been aging since 2008 as a fundraiser for their non-profit organization.

In April 2018, Buffalo Trace Distillery, based in Frankfort, Kentucky, rolled its seven millionth barrel produced since Prohibition into Warehouse V, the only bonded single-barrel aging warehouse in the world. That indicated that the sixth millionth barrel that had been in Warehouse V since 2008 needed to be moved into another warehouse to mature for another year, and this bourbon has now aged a full 10 years 11 months.

The six millionth barrel of Buffalo Trace Kentucky Straight Bourbon Whiskey was filled into four hundred (400) 375ml bottles that are being made available exclusively to non-profit organizations across the United States free of charge to auction off to raise funds for their worthwhile causes. Acts 4 Ministry, Inc. in Waterbury was named among those non-profit organizations nationwide to receive one (1) bottle to assist with their annual fundraising ambitions.

Not available in stores, each bottle from the sixth millionth barrel, valued at $1,250, has a beautifully handwritten description on the glass. Each of the 400 bottles is packaged in a numbered hardwood showcase box that includes a piece of the charred oak stave from the historic barrel and a small brochure explaining the significance of this collector’s edition.

Buffalo Trace Distillery, one of the oldest and most renowned distilleries in the United States, announced that Acts 4 Ministry, Inc. is one of only four hundred charities across the nation to receive one of the bottles of this limited edition straight bourbon whiskey.

Kris Comstock, Buffalo Trace Senior Marketing Director, commented, “We’re thrilled to do something with the 400 bottles to help people in need. We decided on the 375ml size bottles, rather than a larger size, to allow for more bottles so we can help more charities. Our hope is that whiskey enthusiasts will help deserving non-profit groups raise serious money. These bottles are beautiful, the package is first class, and the bourbon tastes amazing. Our goal is to raise $500,000 for charity.”

This is not the first time Buffalo Trace Distillery has offered commemorative bottles for non-profits to raise funds. In 2011 the Distillery offered its’ Millennium Barrel of bourbon, put up to age on Dec. 31, 1999. That effort raised more than $150,000 for various charities across the U.S.  In 2016, its inaugural O.F.C. Bourbon Whiskey from 1980, 1982 and 1983 was released in the same manner, and non-profits raised more than one million dollars for charitable causes.

In 2019, the winning Acts 4 Ministry auction bidder will receive the rare bourbon directly, and it will be delivered in a protective box with a branded canvas bag to conceal the case from any scratches.

Acts 4 Ministry, Inc. is a charitable organization that assists individuals or families who have suddenly lost their homes to a fire, flood or other unexpected devastation or upsetting life event. These individuals and families are invited to visit Acts 4 Ministry’s Thomaston Avenue boutique shop in Waterbury to personally select, at no charge, clothing, dishes, glassware, furnishings, and items to meet other basic needs. The organization is dedicated to building relationships with people while providing them with the basics of daily living needs.

For more details about the auction and to place your exclusive bid to receive a piece of history, visit https://www.charityauctionstoday.com/auctions/unique-6-millionth-barrel-of-bourbon--10078.