H.S. Runner Completes Her Own Virtual Half Marathon 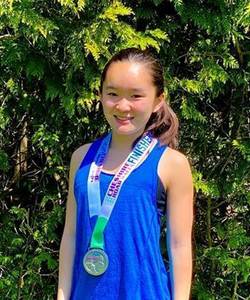 Cheshire, CT - Sunday, April 26, 2020 was set to be the 9th annual Ion Bank Cheshire Road Races. However, state and federal shutdowns forced the event to be rescheduled to October 18, 2020. One dedicated runner was not going to let the postponement of the race stop her from completing the half marathon she had been training so hard for.

Allison Kalva, a junior at Watkinson School in Hartford, trained for months to run her first long-distance race.  It’s no surprise that when the dedicated 17-year-old put her mind to it, she completed her very first half marathon on her own. However, Allison’s inspiring story doesn’t begin and end with her completion of a half marathon. It’s her strength and determination outside of running that truly inspires us.

When she was only 11 years old, her father passed away from cancer.  The passing of her father was understandably a very sad time, but Allison said it gave her a new perspective. “Obviously, I wish he was here, but I have learned that you can’t change the past, you can learn from it and I believe I am a stronger person because of it.”

About a year ago her mother was diagnosed with cancer. Allison describes her mother as a fighter.  “She has always been a fighter - she is the strongest person I know.”

At the beginning of her sophomore year, Allison turned to running. She joined her school’s cross-country team and fell in love with the sport. Her friends were all running, so she figured she would give it a shot, and she never looked back. She loved the team atmosphere and the friends she made through running. She quickly grew to love the sport, “when I’m not running with my team, I'm running alone, and I have learned to hold myself accountable. I love the self-discipline that comes with running, pushing myself and challenging myself daily.” Allison was voted team captain during her junior year.

Allison’s goal was to run a half marathon before she turned 17. Luckily for her, the Ion Bank Cheshire Road Race was set to take place just 5 days before her 17th birthday. When the announcement came that the races were being postponed to October, that didn’t stop Allison from completing the run on her own and achieving her goal to run her first half before her 17th birthday! On Sunday, April 26th, the date originally scheduled for the Ion Bank Cheshire Road Races, she took off running. Allison focused more on finishing the race, rather than her time. With her mom driving around acting as her water stations along her course and cheering her on, Allison finished her first half marathon. “Running a half marathon was a big goal of mine and despite COVID-19 I still wanted to run the 13.1 miles even though it meant running it alone. I truly believe everything happens for a reason and when negative things happen, you can learn from them and try to focus on the good. A huge thank you for friends, mom, cross country team and coaches for their support through it all.”

Allison plans to run the Ion Bank Cheshire Road Races in October with some of her cross-country teammates and coaches. She’s looking forward to running an official half marathon and plans on continuing to run throughout her life.

The Cheshire Half Marathon Foundation is a non-profit organization that supports charities that assist those with special needs and their families. This year’s race and their participants will raise thousands for a number of charities including Abilities Without Boundaries, Best Buddies CT, and Cheshire Lions Club.  The Ion Bank Cheshire Half Marathon & 5K is sponsored in part by Ion Bank, UnitedHealthcare, Porsche Audi of Wallingford and Yale New Haven Health.