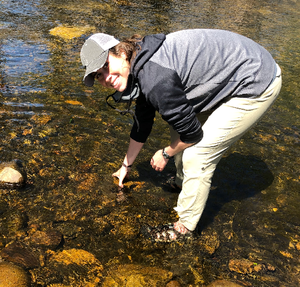 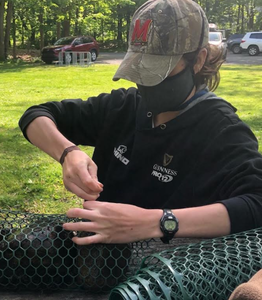 The disappearance of the hornleaf riverweed from many Connecticut rivers over the past century in the wake of widespread dam building and agricultural and industrial development has gained scant public attention until recently, but Western Connecticut State University graduate student Kelly Nealon has embarked this year on a project to demonstrate the humble aquatic plant’s importance to the ecological balance of local river systems.

Kelly Nealon, a Southbury resident pursuing a Master of Science in Integrative Biological Diversity at WCSU, has undertaken field work this spring and summer on the banks of the Norwalk River in Wilton to launch an experiment with several approaches to introducing new growth of hornleaf riverweed. Also known by its scientific name Podostemum ceratophyllum, the hornleaf riverweed is native to rivers in the eastern United States and is adapted to flourish by rooting to rocks in river rapids. It disappeared decades ago from many Connecticut rivers impacted by damming, industrial and agricultural uses that negatively affected the ecological balance for many aquatic vertebrate, invertebrate and plant species.

As environmental preservation efforts in recent years have heightened awareness of the importance of promoting biodiversity and protecting clean fresh-water resources, the WCSU Department of Biological and Environmental Sciences has introduced the M.S. in Integrative Biological Diversity program as a pathway to educate students in the scientific and social dimensions of biodiversity and prepare them for professions that require critical analysis, assessment and management of biodiversity issues. Nealon, who entered the M.S. program in fall 2019, is collaborating in her master’s thesis field work and research with WCSU faculty mentor Dr. Thomas Philbrick, a Connecticut State University Distinguished Professor of Biology.

“The negative impacts that human activities have had on rivers in Connecticut reach back over several centuries and have taken a heavy toll on the ecology of these rivers,” Nealon observed. While the loss of migratory fish and other animal species as a result of river dams has been extensively studied, she said, “loss of native river vegetation is not as well recognized, yet plants play a fundamental role in all biotic communities including those that are aquatic.”

Nealon noted that the hornleaf riverweed has been identified as a “foundation species” on which many other plant and animal species rely. “Beds of this plant create habitat for invertebrates and vertebrates, including trout and other freshwater fish, within river rapids,” she said. “Hornleaf riverweed also contributes to the ecosystem by shunting important resources into the food chain, sequestering dissolved elements such as nitrogen, phosphorus and calcium from the water column and contributing significant amounts of detritus.”

The opportunity to restore the hornleaf riverweed to the Norwalk and other river systems across Connecticut and beyond has arisen because of the efforts in recent years by environmental, state and local organizations to remove dams where possible and restore natural river flow that favors the renewal of native biotic communities.

Together with Philbrick, Nealon has collected hornleaf riverweed specimens from surviving communities at the Little River in Oxford and the Eight Mile River in Lyme and established three experimental methods to test in the waters along a section of rapids on the Norwalk River in Wilton. One method features rocks with plant growth partially scraped before relocation, to determine the timeframe and extent of regrowth; a second features placement of root fragments on granite, secured with plexiglass, to test root attachment to a new surface; and a third features placement of a rock with plant growth between two clean rocks, secured with a plastic mesh cage, to measure the spread of plant rooting to adjacent rocks as the species gains a foothold in the river habitat.

Beyond the immediate goal of restoring a population of hornleaf riverweed to the Norwalk River, Nealon said that she seeks to establish a viable methodology that can be used in transplanting the species to other river systems where it can play a positive ecological role. “Once it has been shown that hornleaf riverweed can be successfully transplanted, others will want to do the same thing in other locations,” she said.

The project is a collaborative venture that has joined the WCSU Department of Biological and Environmental Sciences in partnership with the Mianus chapter of Trout Unlimited, the Connecticut Department of Energy and Environmental Protection, and the city of Wilton. Nealon remarked in her project summary that this cooperative outreach to community and government partners is in keeping with the M.S. program’s emphasis on “environmental stewardship as a community effort and responsibility. It can only be effective when it is addressed by stakeholders with different perspectives who share a common goal of restoring and improving ecosystems and natural resources.”

“I have formed working relationships through our partner organizations with individuals who have been incredibly knowledgeable and very supportive of the work for this research project,” she said.

Nealon earned her B.S. in Animal Science with a minor in Sustainability from the University of Maryland, and remarked that the “close-knit community” she has discovered at WCSU has been an important asset in her graduate studies. “The faculty in the biology department seem especially invested in their students,” she noted, while the smaller size of the faculty “allows students to know their professors on a much more individual basis and opens up unique and exciting opportunities.” She has previously worked as a graduate assistant with Dr. Theodora Pinou and as a research assistant in the Tickborne Disease Prevention Laboratory with Dr. Neeta Connally and Dr. Rayda Krell, and her work in Philbrick’s Aquatic Vascular Plants course inspired her to seek out his mentoring in the Norwalk River project.

Nealon plans to complement her research work with an active community education program that will include signage, talks to local civic groups and other discussions with members of the Wilton community. “The goal of these outreach efforts is to make the public aware of the restoration work that is being conducted, and help them to understand why supporting this type of work will benefit the community and protect natural resources both locally and statewide,” she said.

“Biological diversity is incredibly important because it is central to nearly every environmental issue,” she observed. “I believe this master’s program and my current research project will be excellent preparation for wherever I go next.”