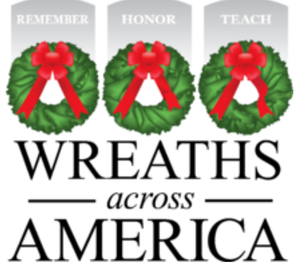 National Wreaths Across America Day is Saturday, December 18. Once again, the veterans of Southbury will be placing wreaths on the graves of the approximately 560 veterans across 8 cemeteries in Southbury. Wreaths Across America started as a simple gesture that has grown into a national movement of dedicated volunteers and communities coming together to not only remember the nation's fallen and honor their service, but to teach the next generation about sacrifices made for us to live freely.

In 1992, Morrill Worcester, a wreath maker in Maine, found himself with a surplus of wreaths. Arrangements were made for the wreaths to be placed at Arlington National Cemetery in one of the older sections of the cemetery, that had been receiving fewer visitors with each passing year. The annual tribute went on quietly for several years, until 2005, when a photo of the stones at Arlington, adorned with wreaths and covered in snow, circulated around the web. Suddenly, the project received national attention.

Last year, December 2020, Wreaths Across America, and its national network of volunteers placed 1.7 million veterans' wreaths at 2,557 participating locations in the United States and worldwide.

This is the third year that the Lt. C. Edward Hine American Legion Post 147 and the veterans of Southbury will be sponsoring Wreaths Across America. The Southbury Ceremony begins at 12:00 Noon, Pine Hill Cemetery/Ballantine Park Parking Lot, followed by the placing of wreaths on the veteran's graves.

For more information about Wreaths Across America, to volunteer, or to sponsor a wreath please go to www.wreathsacrossamerica.org/CT0096P.