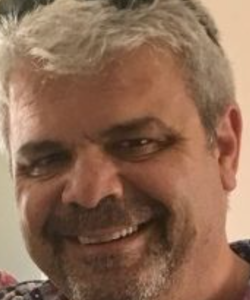 George Chatzopoulos, 55 of Orange passed away peacefully on January 10, 2022 at his home surrounded by family after a valiant battle with brain cancer.

He migrated in 1988 to the United States in his early 20’s and started working alongside his father as a dishwasher. In 1995 he began his journey of entrepreneurship when he purchased Eats and Sweets in West Haven, CT. After selling Eat’s and Sweets he worked as the General Manager in the Athenian Diner in Milford, CT.

In 2003 he bought Chip’s Family Restaurant of Orange, CT.  This would be the beginning of his American dream coming to fruition. With hard work, dedication, ambition and endless devotion he created an experience that would allow his guests to become family.  Through George’s passion and with the undying support of his family and special staff, Chip’s became a restaurant of choice for families and friends to gather. These core values are what he instilled in his Chip’s Team and has now become part of his legacy.

George was extremely proud of his Greek heritage and humble beginnings. He will be remembered for many things but most of all for his loving and giving heart. He was the first to say, ” How can I help?” and offer to fundraise or contribute whatever way he could to a cause.

Remembering there were people that supported him as he got started and then as his business was growing George believed deeply in “paying it forward”.  One of the ways he did this, was through his annual Thanksgiving fundraisers where 100 percent of the proceeds were donated to a local charity. George was happy to contribute to organizations large and small such as Relay for Life, Make A Wish Foundation, Columbus Housing for the Veterans, Children’s Hospital of Special Care, Operation Hope, Marrakech Inc., Juneteenth Foundation, Orange Country Fair, Orange Fireman’s Carnival, local fire departments, police departments and multiple school and town charities.

He was honored to be a board member of the Connecticut Restaurant Association, Pan-Gregorian Association of Connecticut and proud to be a part of the Lyons Club, Rotary Club, and multiple Chambers of Commerce.  The hard work and dedication of the Chip’s Team was never lost on George. He was forever grateful for their loyalty, dedication and teamwork. He was a mentor to many, always willing to give an opportunity to those that exhibited enthusiasm and ambition. He would often be found relaxing while listening to his Greek music.

One of his favorite past times was dancing zeibekiko along with friends and family.  He was many times the life of the party.  He had a special appreciation for true friendship and cherished the time spent with his friends. He was happiest when his family and friends were enjoying life beside him. Visiting his homeland of Greece annually was something he was sure to make time for.  His family and friends there looked forward to his visit since his arrival always brought the spirit of joy, fun, and feast to the village of Makrissia.

While George enjoyed many pastimes, his pride and joy was spending time with his family, especially his nephews, AJ, Alex and Evan he referred to as “his boys” whom he treated like his own. Some of their best times were their drives to get ice cream or going out to dinner, just Uncle George and the boys.  The Greek word “filotimo” captures the true essence of who George has always been. In the Greek language filotimo represents hospitality, pride, honor, integrity, respect, acts of kindness and unconditional love. George will be sorely missed by his family, friends and his Chip’s Team for all of these things and so much more. His legacy will live on through his loved ones forever.

Calling hours will take place at St. Barbara’s Church at 480 Racebrook Road in Orange, CT on January 14 from 4 to 8. A funeral will be held on Saturday, January 15 at 10:00 a.m. followed by interment at Orange Center Cemetery.

A celebration of life will be held at St. Barbara’s Church Hall following the interment.

In the true spirit of George’s giving nature, the family is requesting that in lieu of flowers memorial contributions can be made to the George Chatzopoulos Scholarship being administered through the endowment fund with St. Barbara’s Church.