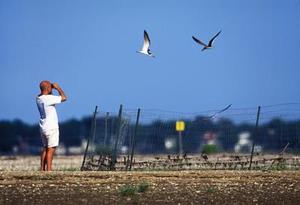 The Recovering America’s Wildlife Act, introduced in the House of Representatives today, would be a game-changer for wildlife in Connecticut, bringing an estimated $12.6 million a year to be used to help at-risk birds and other animals.

Nationwide, it would send $1.3 billion in existing federal revenues to the states to implement their Wildlife Action Plans.

The bill has bi-partisan support and was introduced by Representatives Debbie Dingell (D-MI) and Jeff Fortenberry (R-NE).

Wildlife protection in Connecticut has improved in many ways in recent years but bird populations are declining in general and many species are vulnerable.

Federally-threatened Piping Plovers, for example, increased from 26 nests in 1977 to 36 in 2007 to 66 in 2017. Purple Martins have been removed in recent years from the state’s list of threatened species. Both populations however are still small enough to be highly vulnerable to any number of risks. And other species are not faring nearly as well.

As Prof. Chris Elphick of the University of Connecticut has documented, Saltmarsh Sparrows seem to be on a trajectory to extinction in the next 50 years because of sea level rise.

Prof. Robert Askins of Connecticut College has documented that Blue-winged Warblers have declined by nearly 80 percent over 50 years because of loss of habitat. The frosted elfin butterfly, spotted turtles, grassland birds such as Bobolinks, and beach-nesting birds such as Least Terns are all vulnerable for similar reasons.

Most wildlife conservation money now comes from license fees and taxes paid by hunters and anglers. That money is spent on game programs. The Recovering America’s Wildlife Act would provide money that originates in federal resource extraction leases to protect non-game wildlife, including Connecticut’s birds.

State Wildlife Action Plans are mandated by Congress. The Connecticut Department of Energy and Environmental Protection developed the current plan in 2015 during a long public process that involved local conservationists from around the state – the very people who know the most about the state’s animals and plants.

Connecticut Audubon strongly supports the Recovering America’s Wildlife Act and we urge all Connecticut residents to do the same. As the legislative process moves along over the next several months, we’ll be reaching out to you at the appropriate time to contact your representatives in Washington.