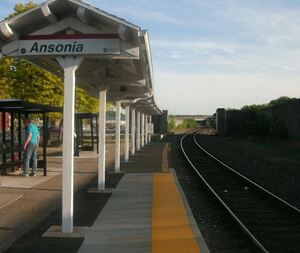 Governor Ned Lamont today visited the Ansonia Train Station, where he joined with other state and local officials to highlight his administration’s plans to install two-way rail service on the Waterbury Branch of the Metro-North Railroad New Haven Line over the coming months, and noted that the project is one of several major transportation improvements that will come to Connecticut following last week’s approval by Congress of the federal Infrastructure Investment and Jobs Act.

The Waterbury Branch is a 27-mile-long, single-track line with six train stations in Waterbury, Naugatuck, Beacon Falls, Seymour, Ansonia and Derby. By adding an additional track, service will increase on the branch to 22 trains each weekday beginning in the summer of 2022. The project was funded by $1.23 million in state funding that will match federal dollars.

“I have been laser-focused on improving rail and transportation throughout the state since I came into office, and the Waterbury Branch is a prime example of infrastructure in the state that needs significant upgrades,” Governor Lamont said. “We are building a transportation system that will lead to more jobs, economic growth, and more money in people’s pockets. Next, the federal infrastructure bill is going to put a historic amount of money into our state to support new roads, bridges, rail, and public transit. It’s going to put people back to work, and it’s going to get our state moving again.”

“The passage of the federal infrastructure bill is a win for Connecticut’s residents and workers,” Connecticut Transportation Commissioner Joseph Giulietti said. “Safety, health, and environmental equity are our top priorities. Thanks to the bold leadership and hard work of Connecticut's congressional delegation we have an infrastructure investment that will benefit future generations. Team CTDOT is ready to get to work delivering these resources to create jobs and enhance the quality of life in all of our communities.”

Governor Lamont said the investments will help advance his administration’s Time for CT initiative, which delivers a roadmap to bring faster and more frequent train service between Connecticut and New York, in addition to the Northeast Corridor Commission’s CONNECT NEC 2035 (C35) initiative, which aims to improve rail throughout the Northeast.

The $5.38 billion Connecticut will receive over the next five years from the federal infrastructure bill is a $1.63 billion increase over the most recent transportation bill enacted in 2015. Its investments include:

In addition to the new investments in surface transportation, the bill will help close the digital gap and connect all Connecticut households to reliable high-speed internet. Once the infrastructure bill set to become law, Connecticut will receive a minimum of $100 million to help provide broadband coverage across the state and many low-income Connecticut families will be eligible for discounted broadband service.