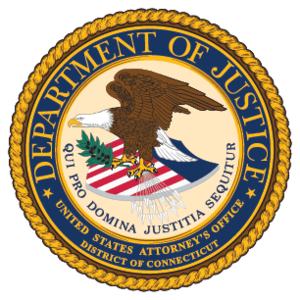 Leonard C Boyle, Acting United States Attorney for the District of Connecticut, announced that JOHN MAGNESS, 72, of Bristol, Maine, was sentenced today by U.S. District Judge Stefan R. Underhill in Bridgeport to two years of probation and ordered to pay a $45,000 fine for scuttling several sailboats and motorboats between the Black Rock Harbor and the Pennfield Reef Lighthouse in Long Island Sound.  Judge Underhill also ordered Magness to perform 50 hours of community service while on supervised release.

According to court documents and statements made in court, Magness, formerly of Southbury, Connecticut, was the owner of Bluefish Cove Marina in Bridgeport.  While preparing to sell the property in 2018, Magness and Peter Albrecht, who worked at the marina, engaged Carlos Santos to sink several abandoned vessels in the Long Island Sound without a permit.  Magness agreed to forgive Santos’ unpaid dockage fees in exchange for his help sinking the vessels.  Investigators identified as least five vessels as having been scuttled at Magness’ request between October 2018 and April 2019.

This matter was investigated by the U.S. Coast Guard Investigative Service and prosecuted by Assistant U.S. Attorney Lauren C. Clark.