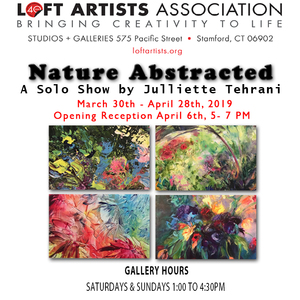 Stamford, CT January 18, 2019, Explore the latest works of award winning Stamford artist, Julliette Tehrani, at her solo show titled “Nature Abstracted” in the Phillips and West Galleries at 575 Pacific Street from March 30 to April 28, 2019, with an opening reception on Saturday, April 6 from 5-7 pm. The exhibitalsoincludes her new paintings on aluminum, reflecting her ongoing artistic journey where she explores new ideas and materials. Julliette, a creative thinker is constantly looking at the world in different ways. Her paintings are mysterious, inviting the viewer to engage their own imaginations to explore the images. She says, “I love working on aluminum, because it enables the paint to be moved around in ways not possible on more traditional surfaces. Magic is created when intended outcomes develop into unplanned random occurrences.”

Julliette returned to painting, her lifetime passion, following a highly successful career as a senior executive in finance. London-born with an international background, her artistic themes are influenced by her extensive travels. She paints in her studios in Stamford, CT and the French Riviera. Her works are held by collectors in the USA and internationally. Most recently, a body of her work was purchased for the new Stamford Hospital. She has exhibited extensively locally and is represented by galleries in the U.S. and France.

Now in its 41st year, the Loft Artists Association is a non-profit organization dedicated to building connections within Fairfield County’s visual arts community and introducing the general public to artists and their work. Their grassroots events attract thousands of visitors throughout the tristate area and have been recognized by funding agencies, including the Connecticut Commission on the Arts, corporate and private sponsors, the City of Stamford and by visitors who return year after year. Sponsored in part by The City Arts Partnership Program, David Martin, Mayor of Stamford, Louis J. Kuriansky Foundation, Bob and Pat Phillips, and DECD/COA.