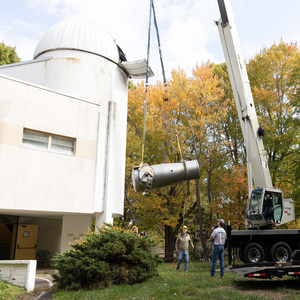 The Stamford Museum & Nature Center (SM&NC) marked a major milestone in its history this week as it took the first step to relocate its historic Gregory-Maksutov Telescope to the Astronomical Lyceum, a historical telescope museum in Magdalena, New Mexico. Stamford Mayor Caroline Simmons joined SM&NC officials on Tuesday to witness the telescope being craned through the dome of the current observatory.

Stamford-based Frank Compo & Sons Inc., the same family company that hoisted and lowered the telescope through the dome in 1965 – returned to extract and relocate it under the expert guidance of engineer and astronomer John W. Briggs and the SM&NC’s distinguished Science Advisory Council.

“Our priority is the safe transport of this historic Maksutov telescope to New Mexico, where we will enjoy a great partnership with the Lyceum,” said SM&NC CEO Melissa H. Mulrooney. “Not only will they be able to keep the telescope in good repair, but we will benefit from being able to look at the dark sky, with viewing unlike what we could ever see here in Connecticut.”

The telescope’s move also makes way for the demolition of the museum’s decommissioned observatory, followed by any necessary site work, and the construction of a new Planetarium & Astronomy Center, the second major signature venue to be added to the SM&NC’s 118-acre campus in the last five years.

At nearly 10,000-square-feet, the new Planetarium & Astronomy Center will combine and expand the SM&NC Observatory with a full planetarium. The facility will feature three levels that include a first-floor, 100-seat planetarium auditorium with state-of-the-art technology, a second-floor Science Lab classroom, and a third level that includes housing for a 22-inch lunar telescope, a solar telescope and a rollback roof to a public viewing deck. In addition to being a cultural attraction, the facility will serve as a center for STEAM (science, technology, engineering, arts and astronomy, and math) education, supporting the Connecticut State standards and new Generation Science Standards.

The Planetarium & Astronomy Center and the Knobloch Family Farmhouse, which opened in November 2018, are part of the SM&NC’s visionary master plan to build future capacity for the museum’s educational and public spaces.