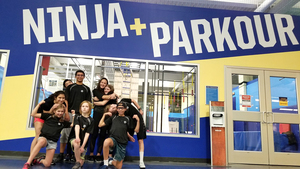 Chelsea Piers is proud to announce nine athletes on the Ninja Team have qualified to compete in the National Ninja League’s (NNL) World Championships. The competition will take place in North Carolina from February 21-23.

In June 2019, Chelsea Piers Connecticut opened the first comprehensive and professionally outfitted Ninja Parkour gym in Fairfield County and one of a handful in the tristate area. The Ninja Team debuted in September 2019.

The following athletes, who are in their first year of Ninja Competitions, qualified for Worlds by placing in the top three of their age group at regional qualifiers throughout New England. These athletes train 4-6 hours per week.

“I have enjoyed watching these athletes grow not only with regard to their physical abilities but also their confidence and attitudes,” commented Marcos Rivera, Ninja + Parkour Coaching Professional at Chelsea Piers Connecticut. “They are able to apply their ninja training, learning to overcome obstacles, to other aspects in their life.”

Coach Mike Gonzalez, who was the 2018 Regional Parkour Freestyle Champion and National Parkour Cup qualifier, will attend the World Championships both as a competitor and a coach. He understands firsthand the mental preparation and focus that is required at these events. Mike often shares his personal competitive experiences with the athletes in assisting them with their preparation.

The National Ninja League’s World Championship consists of multiple individual skills test as well as a 3-stage event. According to the National Ninja League, the 3-stage event is the cornerstone of the World Championship. Every competitor’s score on each of the 3 stages will be combined with the scores from their individual skills events to provide an overall score. The competitor with the highest overall score will be awarded the first-ever title of World’s Stronger Ninja.

Chelsea Piers Connecticut provides an unprecedented opportunity for student-athletes across eight sports to train and compete under one unified banner. Chelsea Piers athletes have full access to both off-surface training, led by certified personal trainers in our dedicated Competitive Team Training Center, and on-surface coaching in their sport of choice. Our world-class facilities attract top-level instructors from around the world, including seasoned and certified youth coaches with Olympic, NCAA and professional backgrounds. Their goal is to prepare athletes for success, not only in their sport of choice through age-appropriate goal setting and training, but also in their lives through the development of essential teamwork and leadership skills.