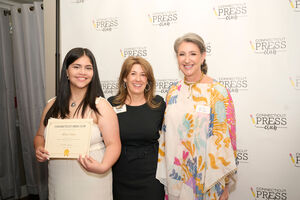 The Connecticut Press Club is proud to announce its 2021 Communication Contest award winners. The Club saluted winners with a cocktail party and awards ceremony on June 8th at the Old Post Tavern in Fairfield.

“The Connecticut Press Club’s annual awards night recognizes the importance of a free press during challenging times, and honors the work of both seasoned and up-and-coming journalists, writers in various genres, and other communications professionals,” said Connecticut Press Club President Michele Turk.

New York Times best-selling author Jane Green served as the emcee for the Press Club’s awards night. “We must never stop telling our stories,” Green told the audience. “With the seismic changes in the world, we can’t give up.”

Nearly 60 communications professionals were recognized at the celebration.

The Connecticut Press Club is an affiliate of the National Federation of Press Women (NFPW) and includes both male and female members. Winners in the state contest advanced to the NFPW national contest. Connecticut landed 30 winners in the national competition, including first-place honors for Megan Gagnon of Moffly Media and Lisa Wexler of WICC radio.

“This year’s competition was one of the most competitive we’ve seen,’’ Contest Director Thomas Renner said. “The quality of submitted work was astonishing. Some of the award-winning work was published in highly-regarded publications. Connecticut’s success in the national competition is indicative of the great work of all the state’s communication professionals.”

For more information regarding the Connecticut Press Club, their awards contest and ceremony, sponsorship, or membership, email Michele Turk at This email address is being protected from spambots. You need JavaScript enabled to view it.