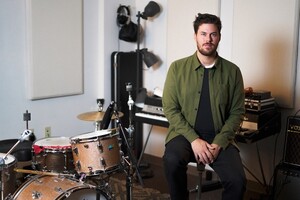 DAE, a Connecticut nonprofit democratizing access to 21st century digital career and life skills for underrepresented youth, is pleased to announce Sam Carlson has joined the organization as an adjunct faculty member. Carlson, an audio engineer with over a decade of experience in the arts and nonprofit sector, will lead DAE’s newly launched music production program in Stamford.

Open to sophomores, juniors, and seniors, DAE's programs are designed to rapidly increase mastery of technology skills for high school students from historically underserved communities. Students in their Stamford location will now have the option to select a 12-month track in music production – writing, producing, editing, tracking, marketing and mastering a series of original songs, culminating in a capstone album of original music. In Stamford, all DAE students receive full scholarships through a partnership with Synchrony Foundation and its Education as an Equalizer initiative.

“I was tremendously lucky to get started on music production at a young age, and it's not something that I take for granted,” said Carlson. “I'm very excited to be working with DAE because it will allow me to share my knowledge with the next generation of creatives and give them the leg up that I had.”

Recording and mixing music has been a life pursuit for Carlson, beginning in his childhood. He grew up in a musical household and learned audio recording from his father, a songwriter and radio engineer. After working in live music at long-standing New Haven venue Cafe Nine and Southern CT’s famous nonprofit Fairfield Theatre Company, Carlson became a founding engineer at Sans Serif Recording – a home grown and fiercely local-friendly recording studio in downtown New Haven.

Since founding Sans Serif, Carlson has helped make dozens of records with a wide range of regional artists. An active musician, he performs regularly with bands like The Tines and Ports of Spain and strives to share the music of Connecticut with the rest of the country, while bringing traveling artists to perform locally as well.

“We are thrilled to welcome Sam to DAE,” said A.M. Bhatt, the nonprofit’s founder and CEO. “Not only will his industry knowledge and unique skill set be invaluable for our students, but Sam also shares our core belief that community-centered education is essential for us to cultivate a more diverse, inclusive workforce and create sustained positive impact in our own backyard.”

DAE’s project-based curriculum teaches the mindsets, skills and interpersonal capabilities needed to be successful upon graduation and engage productively in the digital-era workplace. With a 91 percent retention rate for its youth and adult skills educational programming, DAE balances the content and context of learning – giving students the tools and support to shape their own future... to think, act, and value differently.

DAE’s headquarters is in New Haven and its Stamford programs are located at Synchrony’s headquarters at 777 Long Ridge Road in Stamford. They can be reached at (203) 401-8768 or by visiting mydae.org. For the latest news and updates, follow @DistrictArtsEdu on Facebook and @dae_nhv on Instagram.