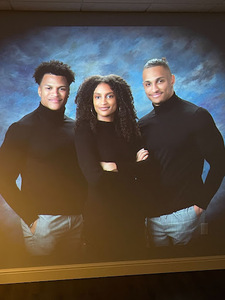 A Stamford family has started a distribution company that will be the exclusive provider of an ultra-premium water drawn from an Alabama aquifer and is touted as the purest on the commercial market.

KAO Distribution, headed by Khairi, Anisa and Omar Fortt, will lead the business that distributes Eleven86 Real Artesian Water. Dr. Tabitha Fortt and her husband, Guy, are assisting their children in the start-up process and are also stakeholders in Eleven86.

KAO Distribution is seeking to distribute the water to stores in Fairfield and New Haven with plans to eventually expand its reach into additional regions of Connecticut, New York, New Jersey and New England. People can find Eleven86 at Jimmy’s Pizza, Juice Kings and Riviera Maya in Stamford and can also have it distributed through a subscription service.

“We believe everyone should have access to clean and pure water,’’ said Anisa, who established her own athletic credentials as a track and field athlete at the University of Delaware. “I don’t think people should ever have to compromise. My parents have done a great job in helping us build a legacy, and we’re excited to take what we’ve learned and pass that knowledge and determination down to future family members.”

“This can only happen by the grace and mercy of God who is the author and finisher of our faith,’’ added Khairi.

Eleven86 Real Artesian Water comes from Autaugaville, Ala., a town of about 800 residents and only eight square miles in central Alabama. The source is an aquifer that has been protected from surface contaminants and pollutants. The aquifer can only be reached by a well. A well drilled into the aquifer is called an artesian well, and water that reaches the ground surface under the natural pressure of the aquifer is called a flowing artesian well.

The Fortts became involved when a family friend looking for investors asked for partners to start the business. Dr. Fortt and her husband joined three other investors and purchased land where the well is located. Using satellites to help find the precise location, the group found the spot to tap into the aquifer. The company that bottles the water, MRaine Industries of Autaugaville, operates out of a 225,000 square foot building that brought 25 jobs to the community.

“Everyone in Alabama knows artesian water is there,’’ Dr. Fortt said. “It used to be great drinking spring water. But no one ever took the time find an aquifer big enough to create a supply for widespread sale.”

Maine Industries launched distribution in April 2018. In less than a year, Eleven86 became a multi-million bottle brand. The water is the purest on the market, with a pH reading of 6.9. The pH value of 7.0 is considered the purest balance of water. Most commercial brands have pH values substantially lower or higher than the 7.0 figure.

The water is delivered by truck to Stamford and stored in a warehouse. KAO Distribution has affiliated with a local trucking company to deliver pallets to customers interested in offering the water to consumers. KAO Distribution plans a regional expansion and is seeking to leverage its relationships with professional athletes and organizations to help build the business.

“Eleven86 water is an ultra-premium water at a mainstream price,’’ Guy Fortt said. “It is the best tasting water on the market.”

KAO Distribution also takes pride in being recognized as a minority-owned business. According to the Connecticut Small Business Association, racial minorities own just 12.1 percent of businesses in the state. The Fortt children will be the primary force behind the distribution company along with their brother Jafar.

“We’re doing this to help the main organization get into new markets, but we also wanted to build this legacy and have something for the kids, like their own 401(k),’’ Guy Fortt said. “We see this as an opportunity to build a strong business with a great product that people are going to enjoy.”

For more information, contact KAO Distribution at This email address is being protected from spambots. You need JavaScript enabled to view it. or by phone at 203-807-8137.