CC Sabathia and the PitCCh In Foundation, together with RPM Raceway of Stamford, host successful PitCCh In Holiday Party 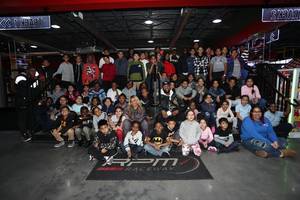 CC Sabathia and the PitCCh In Foundation, together with RPM Raceway of Stamford, hosted the 10th annual PitCCh In Holiday Party on Tuesday, December 10. The event, hosting 70 local youth from the Madison Square Boys & Girls Club – John E. Grimm III Clubhouse, created a memorable holiday experience for all attendees by offering complimentary go-kart racing, bowling, arcade games and dinner. The 10th annual PitCCh In Foundation Holiday party is part of the organization’s ongoing efforts to give back to the communities in which Sabathia and his wife, Amber, grew up and lived in, such as the Oakland-Bay area, the New York tri-state area and Cleveland.

The PitCCh In Foundation was established in 2008 as a 501(c)(3) in 2010 by New York Yankees pitcher CC Sabathia and his wife Amber to help the communities that have given them so much. With the support of CC’s mother and a dedicated team of professional staff and volunteers, the foundation showcases three signature programs that provide young people with the tools to be successful in school and on the field: All Star Baseball Clinic, Youth Backpack Program and Field Renovations. CC and Amber were motivated by not only the idea of giving back, but by developing a long-term platform with the foundation to provide young people with the belief in their abilities and to make their dreams become a reality.