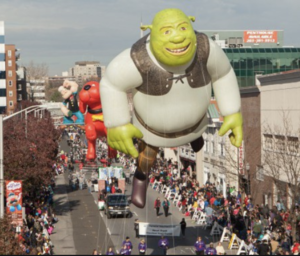 Planned highlights of the parade include balloons such as returning favorites Bob the Builder, Clifford the Big Red Dog, Elmo, Kung Fu Panda, Mr. Potato Head, Scooby-Doo, The Very Hungry and more. In addition to the procession's signature balloons, the streets will also be filled with fabulous floats, dance groups and 10 marching bands, including the University of New Haven Chargers Marching Band, the Butler Golden Tornado Marching Band, the NYPD Emerald Society Pipe & Drum Band, the Fairfield County Police Pipes and Drums and high school groups from Stamford, Westhill, Trumbull, Roosevelt, Uniondale, Brentwood and Harrison. Television personality Alan Kalter will return as the parade’s Master of Ceremonies at the grand stand for his 16th year.

The parade is scheduled to begin at noon on Sunday, November 24 at the intersection of Summer Street at Hoyt Street and conclude on Atlantic Street, just a few short blocks from the Stamford Metro-North Railroad Station. On the eve of the parade, a Balloon Inflation Party presented by Point72 will be held on Saturday, November 23 from 3-6 p.m. at the intersection of Hoyt Street and Summer Street in Stamford Downtown. This pre-parade event will allow spectators a behind-the-scenes look at the balloons as they come to life.  Music, parade talent and cartoon characters will greet and delight spectators.

Stamford Downtown Special Services District is responsible for creating, managing and promoting a quality environment for people, which enhances the economic vitality of Stamford Downtown.