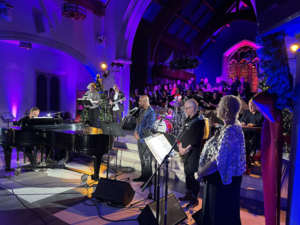 Thousands have already watched the Rob Mathes Holiday Concert, available for just two weeks this year on YouTube. If you haven't watched yet, there are still a few days to see the concert online before it is gone forever on January 5th.

"Last year, in the midst of the pandemic, myself and a few of my band members put together a one-hour unplugged Holiday show. I wanted to make it a free YouTube offering as a gesture of goodwill to all of our supporters during the tough time we were all experiencing due to the pandemic," said Rob Mathes. "I called in favors and a small group of musicians and camera people came and helped us put on a humble show. My daughters and nephew sang back-up. Amazingly, thousands of people throughout the world watched it, and judging from my overstuffed email inbox and social media messages, many of them loved it. Our regular home of The Performing Arts Center at Purchase College is still not open for performances this year due to COVID. Because of this, I filmed the concert again. But this year, we performed it in full regalia, including the entire band and choir, all raring to play and sing again. This included my entire choir, six-piece horn section, five-piece band, and our singers D-Train Williams and Vaneese Thomas were all there! Also joining us this year is former Trinity Church Pastor Ian Cron, who traveled from Nashville to do a reading and sing with me. It turned out to be a great show! And the benefit of putting the concert on YouTube is that more can watch it from anywhere in the world!"

The concert is available to watch for free on Rob Mathes' YouTube channel @RobMathesMusic​ through January 5, 2022.

While no audience was present during the taping of the concert, Mathes was determined to put on a-rockin' great show. His annual concerts have been the subject of holiday specials aired on PBS. Every year his sold-out shows feature his all-star band and choir of "Saints and Friends." Rob's all-star musicians include instrumentalists from the Late Show with David Letterman and groups like the Rolling Stones, and features Will Lee (bass), Billy Masters (guitar), Shawn Pelton (percussion), Rick Knutsen (keyboards), Jeff Kievit (first trumpet), Don Harris (second trumpet), Andy Snitzer (tenor sax), Aaron Heick (alto sax), Mike Davis (trombone), and Jeff Nelson (bass trombone). Vocalists and R&B singers James "D Train" Williams and Vaneese Thomas are also staples of the concert. The concerts are a combination of rock, jazz, and blues, including original tunes and holiday classics that put the audience in the season's spirit.

"I'm really excited to have Food Rescue US - Fairfield County as this year's beneficiary of our Holiday Concert," noted Rob Mathes. "Each year, we dedicate the concert to a nonprofit. I've been hearing more and more about food insecurity right here in our own community, and I wanted to do something about it. Partnering with Food Rescue US - Fairfield County is a way for anyone to get involved and help. And the fact that their work helps reduce greenhouse gas emissions and are keeping food out of landfills and is good for the environment, was a big factor for me to want to support the organization."

Rob Mathes has had a busy year working with numerous musicians and writing orchestrations, conducting performances, and producing albums behind the scenes. His annual Holiday Concert is the one time of the year Rob takes center stage and performs with the band and choir he loves, bringing holiday cheer to his many fans throughout the world. 2021 saw Rob conducting the orchestrations for new artist Scarypoolparty's debut album The Act of Forgiveness on Hollywood Records, arranging and conducting the orchestra for Weezer's new album OK Human, conducting a live performance of Weezer's record with the Los Angeles Philharmonic at Walt Disney Concert Hall in LA in early 2021, orchestrating the songs for the film of Lin Manuel Miranda's In The Heights, and also orchestrating Lin's upcoming directorial debut Tick, Tick, Boom, written by Jonathan Larson, composer of Rent. Rob also worked closely with Hamilton's music producer Alex Lacamoire on both projects. He also worked on a new album to be released in 2022 by artist Pete Muller. In addition, Mathes wrote several arrangements for Tony-winner Leslie Odom and orchestrated several songs for singer-songwriter Patti Scialfa's forthcoming record. In September 2020, Rob musically directed the first in-person show given at the Kennedy Center featuring soprano Renée Fleming and singer Vanessa Williams since the pandemic started.