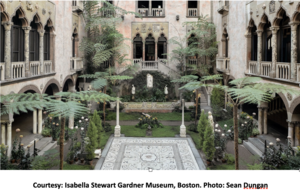 GREENWICH, CT – On the night of March 18, 1990, two men in police uniforms arrived at the Isabella Stewart Gardner Museum in Boston. Over the next 81 minutes, they removed and then absconded with 13 invaluable works of art. More than 30 years later, the question is once again being asked: are those Rembrandts, Vermeers and Manets gone forever? Even today their empty frames hang at the Gardner, a constant and excruciating reminder of inexplicable loss.

With the artworks valued in current terms at possible $500 million or more, an important new lead might just be the key to finally cracking the case.

Join renowned Boston reporter Bob Ward as he discusses his latest reporting in The Caper That Stunned the Art World: The Gardner Museum Heist, 30 Years Later. It is produced by the Bruce Museum of Greenwich, CT, as a part of its Bruce Presents: Thought Leaders in Art and Science speaker series,taking place via Zoom on Thurs., June 2, 7pm EST. Support for Bruce Presents is generously provided by Berkley One, a Berkley Company.

In a statement, Bruce Museum COO and Managing Director Suzanne Lio said, “For museum administrators, collectors, and sleuths alike, the unsolved mystery of the Gardner heist remains irresistibly alluring. For three decades, the authorities have amassed an incredible number of leads, clues and theories—but still no breakthrough. That’s why Bob Ward’s latest reporting intrigues. He thinks the case will one day be solved—and we’re excited to explore why.”

The discussion will be moderated by Leonard Jacobs, co-producer of the Bruce Presents series.

To join this online, live-streamed Zoom webinar, visit www.brucemuseum.org and click on the Reservations button to sign up. Tickets are free for Bruce Museum Members; $20 for non-members.

Bob Ward is a Boston 25 News Reporter and is widely regarded as one of the best crime reporters in New England. Bob’s reporting at WFXT has spanned more than two decades. From local investigations to federal probes, he has covered hundreds of high-profile cases and is known for getting officials, alleged criminals, even witnesses to go "on record" in his reporting. Bob’s exceptional storytelling combined with his extensive law enforcement contacts led to the creation of his Boston 25 series, "New England's Unsolved." The feature profiles unsolved criminal cases in the region and serves as a powerful voice for victims and their families. Working with families and authorities, Bob’s reporting has helped bring attention to cases that have fallen from the headlines. His reporting has been instrumental in uncovering new leads resulting in the arrest of dangerous fugitives. In 2017 Bob launched a podcast for “New England’s Unsolved,” and received an Edward R. Murrow Award for his work. Bob also works closely with "Mass Most Wanted," a consortium of 39 law enforcement agencies that share information to track down criminals. The partnership has resulted in the arrests of some of New England's most wanted criminals. Over his career, Bob has received numerous awards and commendations, including the Mass State Police Superintendent’s Commendation Award, the FBI Director’s Community Leadership Award and recognition from the Molly Bish Center and Foundation for his reporting on missing children. Bob serves on the Board of Directors for the Garden of Peace, a memorial to victims of homicide. Bob’s broadcasting career includes positions at WJAR-TV in Providence, R.I. and WMUR-TV in Manchester, NH. He has received several Boston/New England Emmy Awards and a Massachusetts Associated Press Award. A native New Englander, Bob is a graduate of Emerson College.

About the Bruce Museum

The Bruce Museum is a community-based, world-class institution highlighting art and science. Accredited by the American Alliance of Museums, the Bruce has been voted the best museum in Fairfield County by area media in recent years. Located in a park setting just off I-95, exit 3, at 1 Museum Drive in Greenwich, Connecticut, the Bruce Museum is a 5-minute walk from the Metro-North Greenwich Station. For additional information, call the Bruce Museum at 203-869-0376 or visit brucemuseum.org.