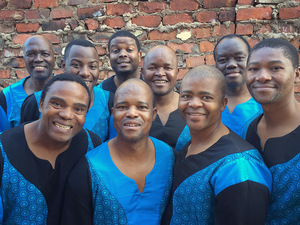 The legendary a capella choral group Ladysmith Black Mambazo is set to appear at The Ridgefield Playhouse on Wednesday, August 17, 2022 at 8pm.  The show, part of the HamletHub World Music Series and sponsored by Soul Sister Travels, is the group’s only Connecticut tour stop.

The group sings isicathamiya, a kind of musical style that uses only voices with no instruments, featuring close harmonies and many voices blending different notes at once and including hand movements and tight choreography.  A global musical phenomenon based in South Africa, Ladysmith Black Mambazo has been performing since the 1960s. The group catapulted into American conscience when they collaborated with Paul Simon on his 1986 album “Graceland” and haven’t left it since, with more recent songs produced with Josh Groban, David Guetta, and Sarah McLachlan.

Ladysmith Black Mambazo has garnered 19 GRAMMY Nominations and 5 GRAMMY wins, with their most recent album “Shaka Zulu Revisited” winning for Best World Music Album in 2018. Make it a great night out with dinner and a show - visit TerraSole (3 Big Shop Lane, Ridgefield) and enjoy a free glass of house wine with your entrée when you show your tickets. Media Sponsor for this event is 90.7 WFUV.

When Nelson Mandela was imprisoned for his political opposition, Paul Simon visited South Africa to record “Graceland.” Looking to collaborate with South African musicians, Simon came across Ladysmith and the group’s leader, Joseph Shabalala, who has since passed away. After sharing the group’s vocals on the album, and selling 16 million records in 1986, the group became internationally famous and produced their own album (through Simon) in 1987 titled “Shaka Zulu” which won the band its first Grammy Award. After Mandala’s release, he brought Ladysmith along with him to the Nobel Peace Award Ceremony in 1993 and designated them "South Africa’s Cultural Ambassadors to the World.” With their music underpinning a timeless message of peace, love and harmony, each performance is a treat for the soul and the senses, proving without a doubt that music is a universal language that binds us all together.

For more information or to purchase touchless print at home ticket ($55) go online at www.ridgefieldplayhouse.org or, you can visit or call the box office (203) 438-5795.  The Ridgefield Playhouse is a non-profit performing arts center located at 80 East Ridge, parallel to Main Street, Ridgefield, CT and is committed to keeping the arts alive and available to all.