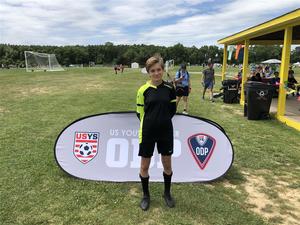 New Canaan Country School seventh grade soccer player, Elizabeth Hall, is one of two female athletes from the state of Connecticut to be selected for the 2019-2020 East Region Olympic Development Program Player Pool. The honor follows a series of tournaments and tryouts which began in 2018.

In addition to playing for the Country School Cougars, Elizabeth – a resident of Stamford – also plays for the Connecticut state team which won their group in the East Region tournament over the summer. Additionally, she has been invited to participate in the Inter-regional Training Center this winter, one of several steps she must take in the hopes of ultimately representing the United States in international competition.