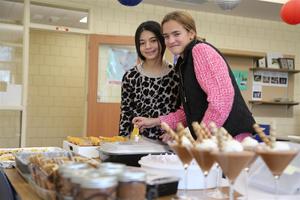 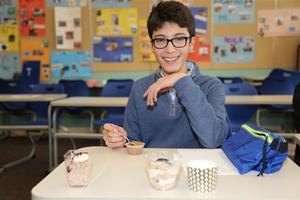 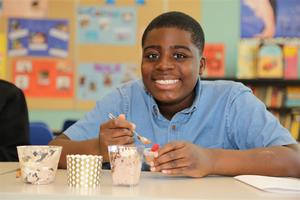 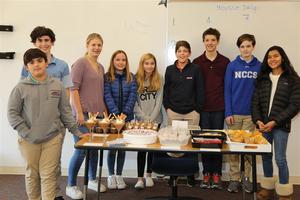 The results are in! The winners of New Canaan Country School’s 2019 French Mousse-Off are seventh graders Daniel Marin of Easton and Chandeny Vasquez Rhamen of Stamford, eighth grader Maria Flores of Stamford and ninth grader Annika Mannix of Wilton. Scoring for the annual culinary contest was based on taste and execution as well as overall presentation of the delicious dessert, often associated with haute cuisine.

Students may choose to use the traditional chocolate recipe or experiment with other flavors. Several entries were adorned with flourishes such as berries, marshmallows, KitKats or grated chocolate sprinkles.

Resilience, it turns out, was the most important ingredient.

“It took me about ninety minutes to make mine,” said Daniel Marin. “I messed it up almost right at the very beginning. I broke open all of the eggs into a bowl and then read the instructions which said that I had to carefully separate the yolks from the egg whites, so then I had to go back and do that by hand which was really hard.” Daniel’s mousse followed the traditional recipe.

“I chose the raspberry topper because that was how it looked in the photo our teacher showed us in class. I decided to stay true to the original. I really thought that some of the other entries were going to win, because they were so neat and used fancy cups or glasses. I was really surprised and happy when I found out that mine won because it was the best tasting.”

“The Mousse-Off is a fun way to introduce the students to French culture and cuisine,” said Upper School World Language Teacher Christie Lundquist. “My goal is to make the French language come alive for them through the traditions, customs and foods of France.”

All Upper School French students participate in the activity, both as chefs and as judges. A rubric is used to objectively evaluate the anonymous entries, organized by grade. While only four winners earned Mouse-Off bragging rights for the year, everyone goes home with a smile, a full stomach and a newfound appreciation for French dessert making.

New Canaan Country School is a co-ed, independent day school for students in Pre-K through Grade 9. Located on a 75-acre campus in New Canaan, the school provides transportation to families living throughout the region. For more information about the school, please visit www.countryschool.net.