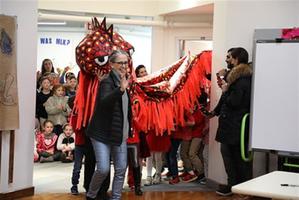 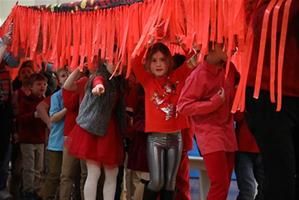 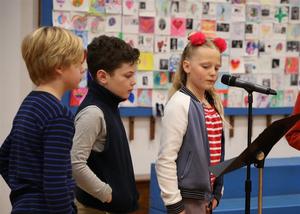 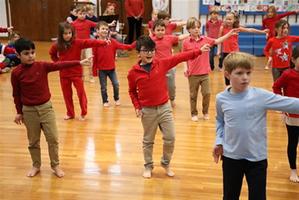 New Canaan Country School first graders have been studying China throughout the year, so they were brimming with excitement Feb. 7 at a special Lunar New Year assembly, complete with a traditional dragon parade, handmade noisemakers, and the banging of a gong, to celebrate the arrival of the Year of the Rat.

Fourth grade assembly announcers Sam Peake of New Canaan, Wiley O'Connor of Darien and Fleur van Reesema of Rowayton introduced the first graders and shared that while often called “Chinese New Year,” this holiday is celebrated throughout Asia. The announcers, who remembered their study of China a few years prior, shared that during this holiday oranges are given as gifts, as are red envelopes with money inside, and that red and gold are the colors of good luck.

Stamford resident Sharon Liu, mother of second grader Albert Liu, also made a presentation to the entire first grade sharing the history of the traditions surrounding the holiday. Students learned how families gather together to wish for good luck, good health and prosperity during the 15-day period of celebration which follows the start of Lunar New year. They learned that decorating one’s home with red strips of paper is believed to keep bad spirits away, and that it is important to clean one’s house and open the windows to let bad spirits out before the holiday.

In class, students painted cherry blossoms and practiced counting and writing Chinese numbers. They made the papier-mâché dragon in art class under the direction of Visual Arts Teacher Liz Ferran, which they proudly paraded through the Lower School halls.

Students began their interdisciplinary study of China by discussing the country’s population, key industries, weather, climate and wildlife. They then turned their attention to cultural traditions. They also learned about the life of a Chinese student and discussed the similarities and differences to their own experiences.

New Canaan Country School is a co-ed, independent day school for students in Pre-K (ages 3 & 4) through Grade 9. Located in New Canaan, the school serves families living throughout Westchester and Fairfield counties. For more information about the school, please visit: www.countryschool.net.