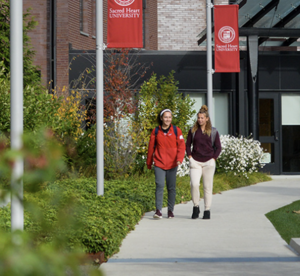 The two scholarship recipients were chosen recently from a robust applicant pool. They started the program at the end of May alongside a new cohort of students.

“It’s all coming together,” said Jamal Robinson, NEBCO’s director of sales. Robinson had rallied his colleagues at NEBCO to develop ways to diversify the craft brew scene. Through NEBCO’s equity committee, the idea to start a scholarship came about. “It really feels amazing that this idea has become a reality. We’re trying to make a change, and we are,” Robinson said.

Karim Kallon, of Stamford, received the NEBCO scholarship. He has co-owned Best Friends Lunch for about three years with—you guessed it—his best friend, Tommy Mansilla. The two have been brewing beer for nearly a decade.

Back then, on a lazy Saturday when Kallon and Mansilla were hanging out, Mansilla suggested they make beer with a brew kit. Instead of following the step-by-step instructions, they mixed up ingredients to create their own concoction. About three weeks later, when the beer was ready to drink, they found that what they brewed tasted pretty good.

“We started doing that every week,” Kallon said. “It was really cool. I realized I really enjoyed creating the product. We started doing it for fun, and then it became popular among our friends.”

The duo started bringing their beers to friends’ houses and parties. Then, Kallon left a few of his beers one day with the owner of Brick House in in Stamford, to taste-test, and the owner was impressed. He gave Kallon a few kegs to brew in and then, a few weeks later, people were drinking Kallon’s home-brewed beer at Brick House. He continued to do this monthly, and eventually someone approached Kallon and asked if he could invest in his beer.

“That’s when I realized we might have something here,” Kallon said.

Kallon’s previous career was in sales; he said he never really fit. But he felt differently about brewing. “This was ours. We get to be creative,” he said.

Kallon said he heard about the scholarship to SHU’s program through multiple people, including his mom. “Once she told me about it, I knew I had to apply,” he said. He was pleased when he learned he was selected. “I didn’t know who I was up against, so it was really cool they thought I was the right fit.”

Robinson said Kallon is a perfect recipient. “He’s already on the scene, he’s a small, Black-owned business and we’re supporting him,” Robinson said. “We’re helping him advance his career. When we talk about people of color getting a piece of the $83 billion dollar economic impact that craft beer represents, this is exactly what we mean.”

Though Kallon didn’t know much about the science of brewing beer, he is learning about it now because of the NEBCO scholarship. He’s also enthusiastic about making connections and being around people who love beer and brewing as much as he does. “This is a great opportunity to learn and meet new people,” he said.

Alex Showerman, Athletic Brewing Company’s director of JEDI (Justice, Equity, Diversity, Inclusion) and nonprofit partnerships, believes that to build a more inclusive craft beer industry, there must be systemic change. People must think beyond the company, she said.

“One of the biggest challenges is workforce development,” Showerman said. “If we keep recruiting from the same pool of candidates, then we will continue to speak only to the same audiences within the industry. Our goal is to widen the aperture of the craft brewing world. The scholarship is an incredible opportunity to bring not only new people, but fresh perspectives and creativity into our industry to create lasting and meaningful change.”

Bill Shufelt, co-founder of Athletic Brewing, said that, being a non-alcoholic brewery, “we feel that our product is inherently an inclusive one. More people can enjoy our product on more occasions. However, we’ve realized that when it comes to welcoming traditionally under-represented communities into craft beer, there is so much work to be done. We can’t just assume our industry is inclusive; we have to proactively reach out and invite new communities to be a part of it. Bringing in new communities and fresh perspectives will only make our industry a more creative, safe and welcoming place for all.”

Oren Ferris of Hartford, received the Athletic Brewing scholarship. Like Kallon, Ferris said he’s always enjoyed beer. As the craft beer industry began to flourish, he started attending beer festivals. “I really enjoyed the community and, of course, the finished product,” Ferris said. He started visiting more and more breweries and wanted to find a way to get involved.

In the summer of 2019, he started working at the beer garden in Hartford’s Bushnell Park as a server and also handled customer service. He enjoyed the fast-paced environment, talking to customers and learning about new beers.

That position led him to his current job at Hog River Brewing Co. in Hartford as a closing manager. In this role, he gets a glimpse of the process’s various aspects; from serving in the tap room, to viewing production and canning, to maintenance.

“I enjoy it all,” Ferris said.

Ferris learned about the scholarship opportunity at SHU through the CT Brewers Guild’s social media pages. The guild is a nonprofit organization that promotes the interests of the state’s beer scene. It also developed an endowed scholarship fund with SHU: the Connecticut Brewers Guild African American Brewing Scholarship, which, when fully funded, will cover tuition for a Black student in the brewing science program each year in perpetuity.

Ferris said that when he realized the Athletic Brewing scholarship was only for Black applicants, he was a little shocked, but pleased something was being done to make the industry more diverse and inclusive. “This is a step in the right direction,” he said.

Ferris saw the scholarship as an opportunity to get himself into the industry. “I have this passion, and I thought it could grow if I got this scholarship.” He wasn’t impressed with his corporate career and was looking for a change.

“What’s the worst that can happen?” he said at the time. When he received the call about being accepted, he was speechless. “It really solidified for me, this is the path I should be on,” he said. “This is my opportunity to learn and to grow and make the most of myself.”

“We are so thrilled to support Oren,” said John Walker, co-founder of Athletic Brewing Company. “We know that he not only shares our passion for delicious craft beer, but also for entrepreneurship and building inclusive communities. Our hope is that this program continues to help him work towards his dream of one day starting his own company in the craft beer space. We can't wait to see what he comes up with.”