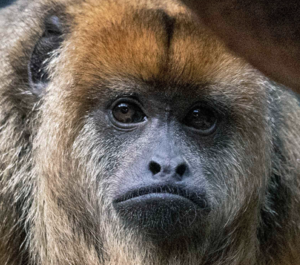 Zoo Director Gregg Dancho said, “Our Black and Gold Howler monkeys are some of the most popular animals who make their home here at the Zoo for their charismatic personalities. Native to Brazil, Paraguay and Argentina, they are an important South American species. We’re pleased to welcome ‘Ella’ and ‘Lina’ to the Zoo.”

About Black and Gold Howler Monkeys

These large monkeys grow to about 2 ft. in length, not including their tail, and have long, soft fur. Males can weigh on average about 15 lbs., sometimes weighing twice as much as the females. These monkeys have a long prehensile tail, with a hairless underside, useful for grabbing onto tree limbs when they are feeding. Howler monkeys are the loudest animals in the New World, with a guttural howl that can travel for three miles through dense forest. These monkeys are a great example of sexual dichromatism, when females and males of the same species have different colors. Females and young of both genders are a golden color, while adult males are black. The species is under pressure from habitat loss as well as being hunted for meat, and for export for the illegal pet trade. Their average lifespan is 16-20 years, although the Zoo was once home to the longest living Howler monkey in human care, Zuele, who passed away at 32 years of age.