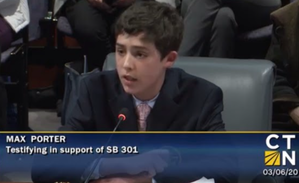 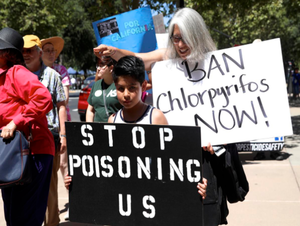 Editor's note: the author, Max Porter is a summer intern here at HamletHub. When he was 15 years old, a junior at Wooster School, he did something most high schoolers have never done - he traveled to Hartford and advocated for the passing of a bill that would ban the pesticide chlorpyrifos. Here, Max talks about the history of this pesticide, the danger it poses, and why he continues to fight for its elimination.

During World War II, the Nazis developed the pesticide chlorpyrifos for chemical warfare. After those six costly years, chlorpyrifos was repurposed and rebranded as a cheap pesticide that was “safe.” This made it one of the most popular pesticides in the United States and it was quickly widely used on food, land, wood, and industrial products. But over the past few decades, it has come to light that the harmful and easily exposable nature of chlorpyrifos during World War II lingered.

Chlorpyrifos’ use has frequently been linked to day-to-day minor health issues as well as more serious effects, many of which are passed onto children in fetal development, such as impaired developmental issues, forms of cancer, Parkinson’s disease, nervous system problems like paralysis, lung failure, and death.

In February and March of 2020, I advocated with environmental advocate Tara Cook-Littman in Hartford, Connecticut for SB 301. This bill entailed the complete ban of chlorpyrifos in the state. I met with legislators like my state senator, Craig Miner, and state representative, Stephen Harding, and testified at an Environmental Committee meeting to rally support.

I had never previously thought of myself as an environmentalist. However, as I learned more about the dangers of chlorpyrifos, I knew that maximum profit for a select few using the pesticide was far less important than the livelihood of so many innocent citizens. I wanted to fight for this basic right for safety that was vulnerable because of chlorpyrifos.

Sadly, SB 301 failed to pass. I was extremely disappointed with the many politicians who both voted against the bill and claimed to have citizens’ best interest at heart. It seemed as if my effort was worthless. But it turns out that this was not the case.

On August 18th, the Environmental Protection Agency announced that the pesticide chlorpyrifos being applied on food products is banned in the United States. My voice, argument, and that of thousands of others’ advocating for the ban of chlorpyrifos bundled together made a noise and a case that the EPA and other federal agencies could not ignore any longer.

The level of impact that one individually makes is hard to assess. However, someone intending to do so always makes a level of difference, no matter how small in the grand scheme of things, and that is encouraging.

The EU, California, Hawaii, New York, and Oregon have banned chlorpyrifos' application entirely, not only on food. Although the Environmental Protection Agency’s recent announcement is a triumph, more must be done to equal the status of these other bans in Connecticut and on a nationwide level. There are still so many ways that chlorpyrifos is used in the United States that have consequential implications.

If the argument to ban chlorpyrifos entirely resonates with you, please advocate on a state and federal level. Contact the politicians that represent you; donate to groups advocating for the ban of chlorpyrifos; go out in the field yourself. You can and will make a difference.