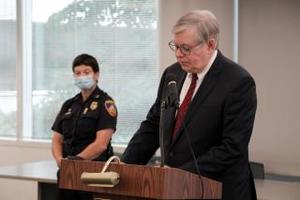 At the direction of Mayor David Martin, Stamford Police disbanded protesters at Latham Park and ensured the removal of remaining tents on Friday, July 17.

The protesters were asked to vacate the park Wednesday afternoon, July 15 and were directly advised if they did not vacate the park, their materials or possessions might be confiscated. Upon the arrival of the police this morning, many demonstrators left the park voluntarily and took their belongings with them. No arrests were made today.

“Since nationwide protests began in late May, many people have protested to pursue changes in police, mental health, and many other issues of equity and entitlement. As the head elected official of this City, I have been open to hearing suggestions and complaints, and discussing issues with residents and local organizations. Many requests from citizens have had an impact on city policies. While not every complaint or request can be fulfilled, and some issues require much time to resolve, public support often helps positive change become a reality. Protests and other forms of expression — even if they are uncomfortable — are part of our American democracy, I would even say a necessary part of our democracy.

Regardless of anyone’s position on specific issues, this administration wants to keep our community whole and resolve disagreements peacefully. We met multiple times with individuals who identified themselves as organizers and discussed their demands, shared what Stamford is already doing to advance police reform, and corrected misinformation. These conversations were long and occasionally tense, but I believe they were productive. For example, the protesters demanded that the city remove a military “combat assault tactical vehicle” that was obtained nearly a decade ago by a prior administration. That vehicle was returned over a year ago. The protesters demanded the police “eliminate monthly quotas.”  Our police do not have quotas.

Much of their concern was focused on mental health services and supporting Ms. Jaddo, the mother of Stephen Barrier, who tragically lost his life to a heart attack after an arrest for alleged domestic violence. I made a personal commitment to Ms. Jaddo and the organizers to get additional information to Ms. Jaddo regarding the case and to share the recent results of the Incident Review Panel we formed to review this heartbreaking case.

We met with Ms. Jaddo and her attorney yesterday and shared this information with her. As promised, the Incident Review Panel findings are now available on the City’s website along with the State’s Attorney’s report, and all available 911 communications and Body Worn Camera video. The Incident Review Panel corroborates the State’s Attorney’s findings and the medical examiner’s report - there was no excessive force or misconduct. Nonetheless, we remain deeply saddened by the outcome of that night and are looking to make improvements that might avoid this from ever happening again.

Even before the national protests resulting from George Floyd’s death in Minneapolis, this administration has been supportive of police reform. Our new Police Chief Tim Shaw has embraced this reform agenda. Despite the numerous challenges from COVID-19 and budget cuts, we will achieve the reforms many of our residents support and deserve.

While I support police reform and I respect our citizens’ right to protest, Stamford residents also have a right to public spaces like Latham Park. Protesters have a right to demonstrate in support of their cause, but to deny the park’s use for other residents and organizations - for an indefinite period - until a group’s specific demands are met is unreasonable.

Although the tents have been removed, the issue of police reform will continue. I anticipate further discussions about the best path forward for our community. To be successful, these discussions must be focused on informed policy recommendations. I will continue to listen to protests, even those with which I might disagree, and welcome community conversations as part of my commitment to make Stamford the best city it can be – to be a place where people want to live, work, and raise a family.

What should be most important to our community is that unlike some protests across the country, in the City of Stamford we allowed the time for this to be resolved in a peaceful manner.”